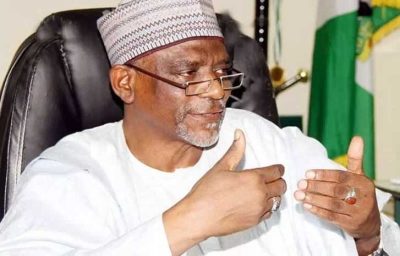 The Federal Government has formal­ly announced the reintroduction of History as a standalone subject in ba­sic education curriculum in Nigeria, thirteen years after its abolition.

About 3,700 History teachers have also been shortlisted for the first round of training for enhanced teaching of the subject.

Minister of Education, Malam Adamu Adamu, while flagging-off a programme announcing the reintroduction lamented that the national cohesion was being threatened with the coun­try retreating into primordial sentiments because of lack of knowledge of the evolution of Nigeria, following the removal of History from the basic edu­cation curriculum. ­

Adamu was represented by the Minister of State for Education, Rt. Hon. Goodluck Nanah Opiah, at the event at­tended by Sultan of Sokoto, His Eminence, Muhammadu Sa’ad Abubakar and other key stake­holders in the education sector.

History was removed from primary and secondary edu­cation curriculums from the 2009/2010 academic session.

But following general reac­tions then that for a country that was still evolving and grappling with issues of social cohesion, political stability and economic development, it could not afford to forget its past, the current Minister of Education, ordered the reintroduction of the subject in 2019.

While speaking further at the flag-off, Adamu said: “History used to be one of the foundational subjects taught in our classroom but for some inexplicable reasons, the steam of teaching and learning was abolished.

“As a result, History was subsequently expunged from the list of subject combination our students could offer in both external and internal examina­tions compared to the subjects that were made compulsory at basic and secondary levels in Nigeria.

“This single act no doubt relegated and eroded the knowledge and information that learners could otherwise have been exposed to. It was a monumental mistake and have already started seeing its nega­tive consequences.

“The loss created by the ab­sence of this subject has led to a fall in moral values, erosion of civic values, and disconnect from the past. More worrisome was the neglect of the teach­ing of this subject at basic and post basic levels of education which invariably eroded the knowledge of the evolution of Nigeria as a country.

“The immediate implica­tion of this was that we lost ideas even of our recent past, and we scarcely saw ourselves as one nation and gradually began retreating into our pri­mordial sentiments,” he said.

The minister added that the training and retraining of teachers in order to enhance their capacity development that would lead to the mastery of the subject will be a focus of this re-introduction.

He said teachers will be pro­vided with the requisite skills needed to teach the subject, the technique, methodology which will eventually give the subject a didactic outlook that will arouse the interest of the children to listen with rapt at­tention and remove the initial barriers that may have inhibit­ed learning.

On capacity building for teachers, having been discon­nected from History teaching for several years, the Execu­tive Secretary of the Universal Basic Education Commission (UBEC), Dr. Hamid Bobboyi, said a total of 3,700 History teachers have been selected from the 36 states of the feder­ation and the Federal Capital Territory (FCT) for training.

He added that the selection was done on pro rata basis, 100 teachers each from a state and FCT, stressing that this would equip them with the necessary skills to teach the subject, espe­cially with the modification of the subject content.

Bobboyi said following the directive by the Minister of Education for History to be re­stored as a subject in schools, the commission and Nigerian Educational Research and De­velopment Council (NERDC) went to work, saying he was glad that the task had been ac­complished with the eventual flag-off of the teaching of His­tory in schools on Thursday.

Sultan of Sokoto, His Em­inence, Muhammadu Sa’ad Abubakar, in his goodwill mes­sage, said Nigeria, as a country, is still evolving and striving to achieve nationhood, adding that the rich history of the country’s diverse constituents could be explored and exploited to serve as an effective tool for nation building.

He appealed to traditional rulers as custodians of the na­tion’s rich culture, traditions and values, and indeed, all Ni­gerians to support the bold step taken by the government and given effect by the Universal Basic Education Commission to return the teaching of histo­ry as a subject at basic educa­tion level.

“We owe it a duty to encour­age research for the documen­tation of the history of our peo­ple and should be forthcoming in granting access to historical records in our custody,” he said.

Atiku vows $10bn for employment of youths, women if elected