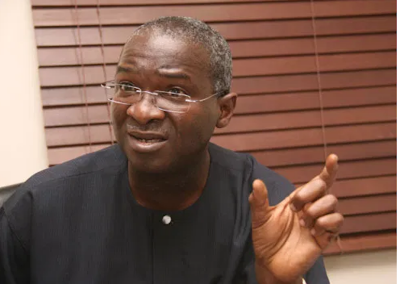 The Minister of Works and Housing, Mr. Babatunde Fashola, yesterday said the ongoing 895 contracts and 795 infrastructural projects nationwide were part of President Muhammadu Buhari administration’s plan to lift 100 million Nigerians out of poverty.

Speaking at the 27th meeting of the National Council on Works and Housing, taking place in Bauchi State, the minister argued that embarking on building massive infrastructure remained the quickest way to create wealth worldwide.

He maintained that nations that are richer than Nigeria have more infrastructure than the country, stressing that in order to bridge the gap there must be deliberate investment plan. He said no nation would be able to grow bigger than its stock of infrastructure.

“When President Buhari committed on June 12, 2019, to taking 100 million people out of poverty in 10 years, his vision was not a federal government vision, but a national one, which has started with the work being undertaken in all states and FCT and to which the federal government is contributing through infrastructure.

“Currently, the federal government is executing 895 contracts in 795 projects spanning over 13,000 km of roads and bridges nationwide.

“Across all of these, engineers, geologists, surveyors, lawyers, bankers, suppliers, artisans and labourers are involved in an ecosystem of enterprise from which they earn a daily, weekly or other periodic income.

“But that is only part of the story, the employment. The other parts include improved asset value, because everywhere a new road or bridge is built, the land value appreciates by up to 30 per cent creating enormous capital gain,” he explained.

Aside that, he noted tat on completion, journeys that used to take days would take only a few hours, positing that in the definition of poverty, well-being, efficiency and the lack of access, are critical factors.

Speaking on the theme: “Infrastructure Delivery, the Maintenance Economy and National Prosperity,” Fashola noted that since the implementation of the Marshall plan in 1948, after the Second World War, it had become clear to any serious-minded economist or politician that infrastructure provision was critical to development. The minister stressed that with proper maintenance, the life of the infrastructure would be preserved, value for the money spent would be obtained, describing it as a critical contributor and driver of Gross Domestic Product (GDP) in many economies around the world.

“Available data shows that in the ‘built industry’, only about 30 per cent of the manpower is employable by design and construction which lasts until the project is completed; while the remaining 70 per cent is employed in the process of operation and maintenance of the infrastructure,” he added.

He posited that in nine facilities that were assessed by the ministry, the conditions of fittings such as fans, air conditioners, light fittings, toilets and wash hand basins, out of 41,800 installations, 12,459, representing 29.8 per cent was found not to be functioning.

“Currently, we are undertaking maintenance works on 41 bridges that have employed 1,157 people directly and created 3,309 indirect jobs and we have facility management contracts for 25 federal secretariats across Nigeria after we completed renovation works. Each facility manager employs at least 40 people,” he added.

Meanwhile, the minister has called on the people affected by the ongoing road construction project in Nasarawa and Benue states to embrace dialogue in resolving issues related to compensation rather than recourse to agitations.

The former Lagos state governor, who made the call during his inspection tour of the ongoing “dualisation” of the 221 kilometres Keffi – Akwanga-Lafia – Makurdi Road, insisted that agitations do not solve problems.

He said the federal government was closely working with the two states to resolve the issues, pointing out that efforts were being made to ensure that the real beneficiaries get the compensation and not middlemen.

“The decision to borrow this money was taken before our administration. So we just completed the process that had been started, a process that we own because this is money borrowed for investment to improve people’s lives,” he said.

The minister who was later joined by the Governor of Nasarawa State, Mr. Abdullahi Sule, also inspected the National Housing Programme (NHP) and Federal Secretariat Complex in the state capital, Lafia. (Thisday)