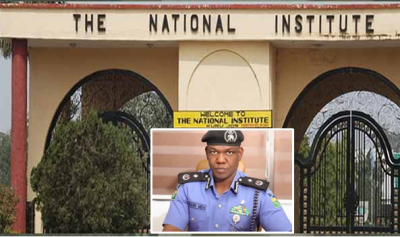 Frank Mba was redeployed by the Inspector General of Police, IGP Usman Alkali Baba, who had ordered him to step down, according to an earlier exclusive investigation published by ENigeria Newspaper.

This Newspaper learnt that his re-deployment is a standard procedure carried out at the discretion of the Inspector General of Police when police officers are promoted.

Despite the fact that Mba first resisted pressure and purportedly disregarded the IGP’s direct order, ENigeria Newspaper can confirm that he has ultimately bowed to pressure and resumed duty today at the National Institute of Policy and Strategic Studies –NIPSS in Kuru, Plateau State where he is expected to serve for one year.

While the Force has yet to issue a public statement on the matter, ENigeria Newspaper has learned that Muyiwa Adejobi, who deputized Mba as Force PRO, is now acting in his place.

According to an inside source, Mba’s ambition may have contributed to his current predicament, since there were reports that he tried to persuade the IGP to send him to Lagos, Delta, Rivers, or Imo, but was requested to formalize his intentions in a written formal letter, which he did.

According to the source, the IGP on sighting his letter deployed him to (Kuru).

After completing his primary education, he attended the Nigeria Police Academy in Kano, where he graduated in 1993 as the best cadet inspector in academics.