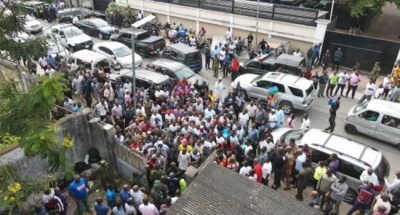 Feb 3, 2023
Prospective bidders for the forfeited vehicles being auctioned by the Economic and Financial Crimes Commission (EFCC), yesterday, lamented what they called shady deals by the auction house in Lagos and officials of the Agency.

The bidders, who thronged the Lagos offices for the conclusion of the process, yesterday, said the anti-graft agency did not have access to where the vehicles were parked, but only displayed the pictures of vehicles with allocated lot numbers for public inspection.

The Agency, on Wednesday, December 7, 2022 commenced the auctioning of a total of 435 vehicles seized by the anti-graft agency.
The assets are subjects of final forfeiture orders in Lagos, in line with the EFCC (Establishment) Act 2004; Public Procurement Act 2007 and the Proceeds of Crimes (Recovery and Management) Act 2022.

The Agency , however, refused journalists and others access to the cars.

The exercise by the auction house was said to be devoid of transparency by bidders.
A senior director of the agency declined response to questions but described the exercise as successful.
A bidder, who spoke with The Guardian said: “So far, the experience has been frustrating; first of all, the whole exercise does not appear transparent because it seems some people have been selected to pay for some vehicles.”

The man, who simply identified himself as Charles said: “Apart from the fact that they didn’t let us see the vehicles, they gave some bidders different vehicles from the one they made a bid for when they came to pay. It appears they are selling to car dealers because I have observed that while others are yet to get one, there are people pricing vehicles above N1 million and they still win up to three vehicles. Why will they allow someone who has won a bid to still bid for more? I have been here for three days and I have not won any.

Another bidder, Henry Chukwube, said: “I have been here for three days and I have not been able to buy any of the vehicles. To me, with what I’ve seen, I don’t think what we have here is transparent.
“We expect to see the cars physically, but what we have access to are pictures. We can’t determine the state of the vehicles by just seeing the pictures.

Contacted, spokesperson for EFCC,  Wilson Uwujaren, refused to answer questions posed to him on the manner forfeited houses and vehicles across the country are being auctioned in Lagos.
When Uwajeren was asked about other property forfeited to the agency, he said: “Did you see the advert? That’s what we are doing now. He declined to respond to other questions.

When approached, an official of the auction house also declined comments and feigned being too busy.  (Guardian)