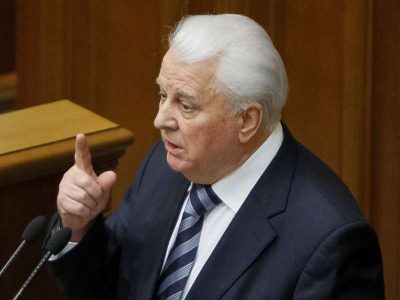 Leonid Kravchuk, a former communist who helped signed the Soviet Union’s death warrant and then served as the first president of independent Ukraine, has died at the age of 88, a senior official said on Tuesday.

“It is sad news and a great loss,” said Andriy Yermak, chief of staff to President Volodymyr Zelenskiy.

“He was a wise patriot of Ukraine, a truly historical figure in gaining our independence,” he wrote in an online post.

Kravchuk became known as the “wily fox” as he rose through the ranks of Ukraine’s communist party, taking over as head of parliament in what was then a Soviet republic in 1990.

But he quit the party soon after an attempted coup against Soviet leader Mikhail Gorbachev in August 1991. Ukraine’s parliament adopted a declaration of independence the same month.

After being temporarily handed presidential powers, Kravchuk was elected president on Dec. 1, 1991, the same day as Ukrainian voters supported secession from the Soviet Union.

“I understood Ukraine could never be really independent if the USSR (Soviet Union) still existed,” Kravchuk said. “I came there knowing Ukrainians’ aspirations to be independent. I was fulfilling their will.”

In 1994, with Ukraine mired in economic crisis and corruption and Kravchuk facing accusations of “plundering” the country, he was defeated at the polls by former missile factory boss Leonid Kuchma. He remained in parliament until 2006.

In 2020, by then a white-haired elder statesman, Kravchuk was appointed to represent Ukraine in efforts to end the conflict that broke out in 2014 between Russian-backed separatists and pro-government forces in eastern Ukraine.

Taking a tough stance against Moscow, he said it was not worth expecting anything from Russia because its objective was “to destroy Ukraine.”

In January 1994, he signed an agreement with U.S. President Bill Clinton and Yeltsin, securing $1 billion in compensation in exchange for Ukraine giving up its post-Soviet nuclear arsenal – the world’s third largest.

As president, he also signed a cooperation accord with the European Union.

Abortion clinics shut down in US after supreme court ruling