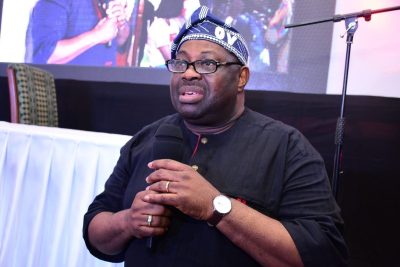 Dele Momodu, journalist and publisher of Ovation Magazine, says he has been preserved by God to become Nigeria’s president.

Momodu said this on Thursday during an interview on Channels Television.

Earlier, Momodu declared his 2023 presidential interest when he met with Ayorchia Ayu, chairman of the Peoples Democratic Party (PDP), at the party headquarters in Abuja.

The publisher had contested for the 2011 presidential election under the platform of the National Conscience Party (NCP).

Asked if he can withstand the influence of Atiku Abubakar and other PDP aspirants, Momodu said he is the biggest brand in Nigeria, adding that no aspirant has friends across party lines like him.

The publisher said he has a huge followership among youths, which he described as the biggest political party, saying his party needs a youth-friendly candidate to defeat the All Progressives Congress (APC).

“I don’t like to sound immodest. There is no brand bigger than — brand Dele Momodu — in Nigeria. I’m not even talking about the party

“I will be one of the few candidates similar to Chief Abiola who will have support across party lines. There is no individual who is relying only on his party who should feel comfortable about winning an election. I’m one of the few.

“When I joined the PDP, my first assignment is to ask the young people to start registering online —iampdp.com — go and check how many people have registered

“If you cannot drive out the youth, the biggest political party — the youth — I called the voters’ party, if a party ignores the voters and you want to defeat an incumbent party like APC, where they have people who don’t care about anything.

“You must get a candidate who is friends with everybody but very firm who can speak truth to power. I have been speaking truth to power despite the fact that most of these guys are my friends. You hardly find such in any political party. Dele Momodu was preserved by God for that role.”

When asked if he would leave the PDP if he did not get the ticket, he said he would support any candidate who emerges as the party’s standard-bearer.