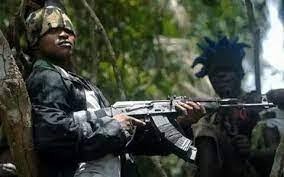 According to Daily Trust, the incident happened around 8pm on Wednesday on Kaduna Estate, Ajaokuta Steel township complex.

An eyewitness said the gunmen invaded a compound where the children live and started shooting into the air before they abducted them.

A family source, who craved anonymity, identified the parent of the abducted children as one Mr Kadiri, an electronic dealer who hails from Edo State.

The source said the gunmen had contacted the family of the victims on Thursday afternoon, demanding N100 million ransom.

The kidnapped children are said to be five, seven and 10 respectively.

The source said, “The gunmen invaded the house of Mr Kadiri, our brother who sells television, radio and other electronic devices.

“They shot repeatedly to scare people from coming close. When they could not see their target victim (Kadiri), they decided to abduct three of his children.

“The kidnappers contacted some of our family members and they are demanding N100m”.

The Police Public Relations Officer in Kogi State, William Ovye Aya, could not be reached for comment. He did not pick up his calls or respond to text messages sent to him on the incident.

Meanwhile residents of Ajaokuta have lamented incessant incidences of armed robbery and kidnapping in the town, saying that they can no longer sleep with their eyes closed.