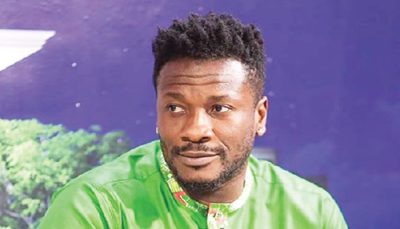 Portugal won the frenetic game 3-2, with goals from Jao Felix and Raphael Leao, after Andre Ayew had cancelled out Ronaldo’s opener from the spot.

Osman Bukhari headed in a late second goal for Ghana, but the Portuguese held on for a nervy win against the team that raised the hope of Africans.

Gyan, who was on punditry duty for SuperSport TV during the game described the penalty call as soft.

“The penalty for me… I don’t agree, in my opinion because it was just a soft touch. Although Ronaldo was a bit earlier, it wasn’t a touch that could be a penalty. The referee should have at least checked the video assistant referee and made his decision. For me, I think it was too soft.”

The former Sunderland striker wasn’t visibly disappointed with his compatriots’ performances, and he didn’t fail to salute their never say die spirit against the Portuguese while he also pointed out the moment that changed the complexion of the game after Ghana equalized.

“The change came in too early. Although Dede Ayew got the goal, he was visibly exhausted before then, but after scoring, he and the man of the moment, Kudu were taken off which I disagree with a bit. But at the end of the day, the players stepped up to the plate. I think the second half is the best we have seen in this competition so far,” Gyan concluded.

The Black Stars sit bottom of Group H and will hope to reignite their campaign on Monday when they face South Korea, before facing Uruguay in their last group game on Friday, December 2.