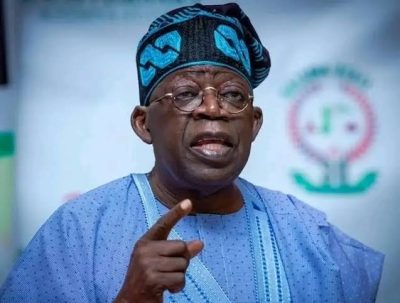 The presidential candidate of the All Progressives Congress (APC), Asiwaju Bola Ahmed Tinubu, has alleged that the current fuel scarcity being experienced in the country and the redesigning of the naira are grand plans by saboteurs to scuttle the 2023 general elections.

“Let fuel be expensive, only they know where they keep it. Keep petrol, keep the naira, we will vote and be elected. You may change the ink of naira notes. What you expect will not happen. We will win,” the APC flag-bearer stated in Yoruba parlance.

“They said petrol will rise to N200/litre and N500/litre, let your mind be at rest. They don’t want these forthcoming elections to hold. They want to scatter it but that won’t be possible.

“They thought they could cause trouble; they sabotaged fuel but with or without fuel, with or without motorcycles and tricycles, we will vote and win. This is a superior revolution.”

“We will take over government through our PVCs. Even if they say there is no fuel, we will trek to the polling units,” he added.

Watch a short clip of Tinubu speaking at the rally below

Speaking further at the rally, Tinubu praised the party supporters for coming in their large numbers to receive him despite the current fuel scarcity across the country.

While stating that he would put an end to the fuel crisis, he described the upcoming election as a revolution, urging the party supporters and indigenes of Ogun State to come out in large numbers, the same way they did for the rally, on February 25 to vote APC.

Speaking to the youth, the APC candidate all promised to ensure that they enjoy quality education not truncated by strikes, while also making jobs available for them once out of school.

He said, “I guarantee you one thing, there will be student loans, nobody will drop out of university because of school fees; nobody will have to repeat one class for eight years and not graduate, we will make a four-year course four years course.

“A Tinubu administration will create over 1 million jobs in ICT in the next 24 months. The fine and skilled graduates of the Ogun Tech Hub will be able to find work as they continue to contribute towards our overall economic well-being.”

“My industrial policy will carry you to the finish line. My plan is to deploy all available measures, from tax credits and youth employment incentives to tariffs to affordable loans and investment so that your industrial base is strengthened, broadened and widened.

“This will produce more wealth and valuable goods, improving the living standards of all Nigerians. It will also spur such job creation in Ogun that everyone looking for work will be able to find it. We will seek to cut youth unemployment nationwide by a third.

“Here, in industrially active Ogun, the decline in the jobless rate will be even more than that. We shall invest in infrastructure in such a manner that all aspects of your daily lives will be touched. Roads and public transportation will be augmented, reducing traffic congestion and allowing you to go from home to work or to the market faster, cheaper and safer.”

He also promised to bring back to life hitherto dead factories in the state through investments in power generation to make the factories more efficient and reduce down times.

With its proximity to Lagos, the APC candidate promised to create in Ogun State agricultural and industrial hubs, while working with local farmers to increase the production and exportation of agricultural produce.

“Rice, corn, plantain cocoa and palm kernels from Ogun will be more actively traded. Moreover, we shall spur investment in agro-allied business to create additional jobs while also generating more income for our local, state and national economies.

“We will support other drivers of value within the start-up ecosystem, including technology hubs and parks. Ogun is truly a place of innovation and growth for it is the home of many great local and international factories including Dangote Cement, Nestle, Lafarge Cement, and Procter & Gamble.

“As we become a nation of producers and not just consumers, Ogun State will play a critical role. We will support the development of the best that the modern digital and IT-driven sectors have to offer. We will provide the complementary infrastructure required for growth, including wider internet connectivity.

“With innovation, courage and creativity, we will harness modern technology to create jobs and provide goods and services that will unlock greater prosperity. By harmonising the National Infrastructure Policy with the National Industrial Policy, we will develop key sectors and spur economic growth. Our goal is to grow our industrial base, encourage industries vital to national development and become a global contender,” added.

Tinubu again didn’t fail to recognize the importance of security in economic and social development, promising to make the nation safe and habitable for all.

He added, “As we work towards achieving overall peace and stability, we will continue to strengthen the economy and renew the confidence in our citizens of a home where they can live and thrive.

“With regard to security, we will ensure that Ogun continues to be a safe and peaceful state. Our security policy is bold yet wise and pragmatic. We shall keep trouble from coming to you. We shall pursue terrorists, kidnappers and criminals where they are.”

Earlier, Governor Abiodun had urged the people of the state to look at the track record of Tinubu, placing him above all other candidates and give him their votes come February 25.

He said, “Asiwaju was a senator, so he is knowledgeable in the area of the country’s laws, he became the governor of Lagos State and transformed it to the biggest economy in Africa. He then brought up successors who have worked on the template he put in place to continue to bring progress in Lagos.

“This is the man that now wants to replicate the same in Nigeria and bring joy on our faces. None of the other candidates can be compared to him in any way.”

This was also reiterated by former Ogun State Governor Aremo Segun Osoba who urged the people of the state to make Tinubu replicate all he has achieved in Lagos State.