How Alaafin predicted his death and faced it boldly 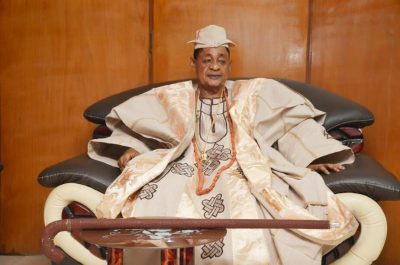 The Alaafin of Oyo, Oba Lamidi Olayiwola Adeyemi, 111, who passed on late Friday night, elicits awe both in life and in death.

He seemed to have had a premonition of his death shortly after the demise of his brother, the Very Revd. Fr. Peter Olayiwola Adeyemi, last year. He looked forward to it and faced it with equanimity.

While receiving a delegation from the Catholic Archdiocese of Lagos and the Oyo Catholic dioceses, led by Dr Emmanuel Adetoyese Badejo, in May last year, the highly respected Yoruba monarch said death was something we should not be afraid of, but it’s reality must be accepted.

“We all try to live a fulfilling life, but there is a great fear of death that tends to hold many people back from living the life they want to. It tends to be the unknown world that makes us be fearful of death, but when you start to look at death from a different perspective, it can clear away some of the fears.

“These quotes about life and death will remind you to live each day to the fullest and not to fear death so much. Life is such a wonderful gift; it makes me humble every single time I stop and think about it. Think about going to sleep and never waking up again.”

Oba Adeyemi said that thinking about death stretches and alters one’s perception, adding that accepting something you cannot change reduces suffering, as it allows one to overcome fear and punches it right in the face.

He said: “It also reveals the importance of love. Many people don’t realise, until it’s too late, that cherishing your friends and family should be your number one priority.

“Thinking about death allows you to figure out what your priorities in life should be. Everybody wants to die in peace without any regret. You must figure out what you want to accomplish and create multiple goals for yourself. My beloved, intelligent, hardworking, resilient, humble and diligent brother did his best while in the service of God. He is no more, but his goodness and legacies are now living after him as being witnessed here today and elsewhere.

“One can achieve anything and be anybody you want to be. Other people on Earth are humans just like you. They are flesh and bones, just like you. You have the ability to do anything that they do. The only limit is the one you set for yourself.”

Alaafin, thanking the Catholic Archdiocese of Lagos for the honour done on his revered institution through a befitting high-powered delegation to commiserate with him on the death of his brother, also said:

“It is important to honour those who have gone before us, and it can be very hard to let go. Even though a loved one would wish us to move on and enjoy our lives, it is a difficult step to take.”

In his address, Most Rev. Badejo described Very Revd. Fr. Adeyemi as “ a mentor, conscientious, awesome, and dedicated priest whose legacies would withstand the tests of time.”

The late Alaafin also delivered a long treatise on death in an interview published in a national daily in 2018, when he was asked to speak on the seeming untimely death associated with the Aare Ona Kakanfo.

“God as the creator of human beings has a purpose for every human being. If you are a doctor, lawyer and even journalist; why did you join journalism? There were times in this country that journalists were thrown into prison and they died in the prison, but you are a journalist and you are moulding the opinions of people; doing your job. So, also it is in different spheres.

“I was young when I was appointed as the Alaafin of Oyo and many people were sceptical, whether I would be able to hold the office. But today, I have become an icon in the area of tradition. The essence of power must therefore be referenced to eternal truth; death is inevitable.

“An adage in Yoruba says a man who says he doesn’t want to die is not fit to ascend the throne of his forefathers. Death is the one that must end the other inventions of the Almighty.

“The greatest inventions made by the Almighty God are birth and death. Without death, there is no life and without life we would not have known anything called death.

“If you fear death, you would not go to Ibadan and you would not travel to your office, because of the fear that you might die on the way, then you would sit down in the house.

“If a house collapses, there are people who would survive it. So, it is not what they say. When you are going to war, you have two prognoses; you either go to war and be killed on behalf of your people or you come back alive.

“In war, the person you are lying next to in the trenches could be hit suddenly by a bullet. It is destined that the person would die that way. So, there is no fear. An adage says, a true warrior does not abscond in times of war.

“And two things await a guard; that he fights and wins or he fights and dies at the war front. A true guard does not die of gunshot injury on his back, rather, it’s better in front.”

The Alaafin seemed to be a cat with nine lives. His death had been rumoured many times in the past. Last year news broke that the monarch had died. But the palace debunked it. What the palace said later turned out to be true. Now the palace has come out with another statement, debunking the Alaafin’s death and calling it fake news. But whether the palace will be proved right the second time remains to be seen.