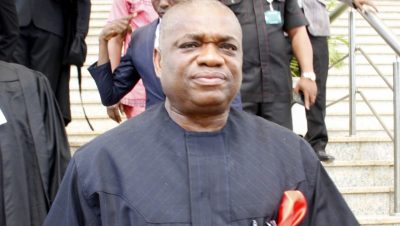 Senate Chief Whip, Orji Uzor Kalu has stated he is not interested in becoming President but will not hesitate if given the chance to pilot the leadership of the country.

Kalu spoke on Sunday during an interview on Channels TV Programme Politics Today monitored by The Nation.

He said: “I am not having that kind of ambition… But if I am given, why not? I can take it.

“If visions are being seen, and people say ‘this and that, if it is the will of God that I will become president, why not?

The former Abia Governor further canvassed support for south-east presidency ahead of the 2023 elections.

“I believe if Nigerians and the Nigerian people want to be fair, a Southeast president from Igbo extraction will be the next thing to do,” he stated.

On insecurity, he lamented the country is painfully at war with itself.

He called on citizens to come out quickly and address issues concerning them.

Killing of 7 policemen: We won’t succumb to secessionist agenda – Wike