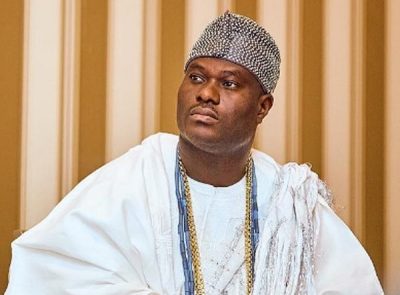 Enita Ogunwusi, Ooni of Ife, has set up a 28-member committee of south-west leaders to look into the arrest of Sunday Igboho in Benin Republic.

Akin Osuntokun, the committee coordinator, said the committee will look into the issues surrounding the arrest of Igboho and related matters.

Igboho is being held by Brigade Criminelle in Cotonou after he was arrested at Cardinal Bernardin International Airport with his wife on their way to Germany on Monday night.

He was declared wanted by the Department of State Services earlier in July after his Ibadan house was raided on July 1, 2021 by the operatives of the DSS.

Two people were killed by the DSS in the late night raid while 12 other persons were arrested and later paraded in Abuja. They have since been charged to court.

Igboho’s extradition hearing failed to take place at a court in Cotonou on Wednesday because the Benin Republic government did not present him in court for unknown reasons.

Osuntokun said: “The Ooni of Ife inaugurated an advisory council comprising eminent Yoruba sons and daughters across the political spectrum. It is called the Ooni Caucus.

“The inauguration ceremony had been scheduled over a month ago and it is just an accident that it coincided with reports of Sunday Igboho’s arrest in Cotonou. Nonetheless the council is actively interested in the new development and would appropriately respond in the nearest future.”

Some of the people on the committee are Oba Olusola Alao, the Olugbon of Igbon; Senator Biodun Olujimi; Toyin Saraki; Segun Awolowo’; Doyin Okupe; Gbenga Daniel, and Muyiwa Ige.  (The Cable)