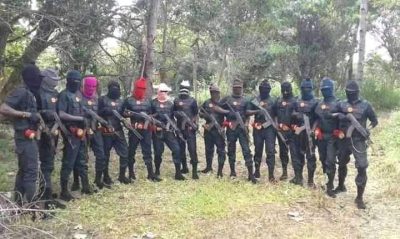 The Indigenous People of Biafra (IPOB) says the allegation of pipeline vandalism levelled against the group by President Muhammadu Buhari is “childish and shallow-minded” .

TheCable had reported that Buhari, in an interview with Bloomberg, asked western allies to designate IPOB as a terrorist group “over involvement” in pipeline and infrastructure vandalism in the country.

“Criminality and terrorism in oil-producing regions hamper production, and it would help if our western allies designated IPOB as a terrorist group, given their complicity in damage to pipelines and infrastructure,” he had said.

Reacting to the president’s comment, Emma Powerful, IPOB spokesperson, in a statement released on Wednesday, said everyone, including the international community, knows that IPOB is not involved in pipeline vandalism.

“The attention of the global movement and family of the Indigenous People of Biafra (IPOB) ably led by our great and indefatigable leader, Mazi Nnamdi KANU, has been drawn to the laughable, disgraceful and fallacious statement from the supposed President of Nigeria, Major General Muhammadu Buhari, alleging that IPOB is behind pipeline vandalism in the Niger Delta,” the statement reads.

“For the impostor in Aso Rock to tell the US and other Western countries that IPOB is responsible for pipeline vandalism in the Niger Delta shows how shallow-minded and uninformed he is.

“Why should he choose to further advertise his ignorance and the failure of his government in credible intelligence gathering by making such laughable, wide and untenable allegations?

“Muhammadu Buhari should tell America and other Western countries the locations of pipelines IPOB vandalised in their evil country.

“The allegation against IPOB by Buhari is childish because everybody knows that IPOB does not engage in pipeline vandalism in Nigeria. Even the international community knows that IPOB is not involved in such an act.

“Buhari should be reminded that his western audience already knows the actual culprits behind pipeline vandalism in Nigeria and who the beneficiaries are.

“What a contradiction and confusion in Buhari’s Nigeria! In case he has forgotten as usual, just last week, his NSCDC (Nigeria Security and Civil Defense Corps) boss threatened to name high profile Nigerians behind oil theft.

“Did the NSCDC boss need to issue such a threat assuming IPOB a ‘terror organisation’ according to Buhari’s Nigeria is actually the ones behind the crime.”  (The Cable)