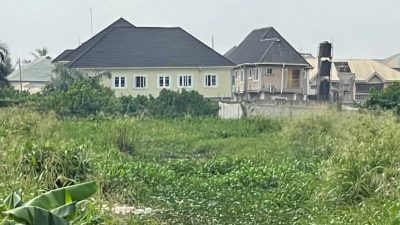 We are waiting for money to complete project, says Igbokwe

Despite warnings and outcries by residents, some developers have completed development on the Isheri Oshun/Jakande Estate Drainage System 6E Oshodi-Isolo, Lagos.

The last time The Guardian visited the area in July 2022, the contractor handling the drainage project had left the place due to cash crunch.

Some of the housing projects under construction in July had been completed despite the Special Adviser on Drainage and Water Resources to Lagos State governor, Joe Igbokwe, promising to pull down the contraventions.

In a letter through their solicitor, Ubani & Co dated July 18, 2022, Members of Peace Home Valley Estate Community Development Association (CDA) and Unity Estate CDA, stated: “The host and beneficiary of the project, bring to your notice and complaint on the delay of the removal of contraventions on the drainage route due to the residents blocking the drainage channel route, which have been marked for removal since 2014 and recently, but resorted to unnecessary protest and court action.

“We also bring to your notice that presently, active work of construction of buildings is going on at the site of the drainage route that has been marked, which needs to be stopped immediately and removed as soon as possible from the drainage route.

Chairman of Peace Home Valley Estate CDA, Ikechukwu Ezeonyeka, said: “Contraveners on the route brought policemen to the site, stop the site engineers, arrested and took them away on August 26, 2022, which we the communities dissociate from and totally opposed to. They are regularly disturbing the workers at the site by intimidation and harassment, thereby forcing them to stop work.

He said: “We are calling on government that all contraveners along the marked route be removed immediately, so that the drainage construction can be completed promptly.  We are pleading that law-abiding citizens of the respected community be protected and freed from natural disasters, like floods to avert the loss of life and property.

“We are calling on the governor to use his good office to intervene in this matter,  to ensure the prompt and timely completion of the drainage project. We seek the timeous intervention of the Lagos House of Assembly to raise a committee to visit and look into this matter.

“We appeal for quick intervention for the project not to be stalled as the flood is still doing much havoc in our communities.

Also, a resident of the area, Sunday, who is also a pastor said: “You need to come here whenever it rains; everywhere gets flooded and residents have to relocate to hotels due to the flood.

Reacting, Igbokwe said: “Don’t worry, we are waiting for money. When we are ready, they will see that they are just wasting their money on the project. We are coming there but we are still waiting for money.” (Guardian)

I took a break from acting because of struggle with facial…