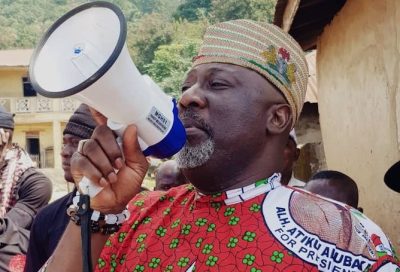 Atiku Abubakar, former vice-president of Nigeria and presidential candidate of the Peoples Democratic Party (PDP), has appointed Daniel Bwala and Dino Melaye as spokespersons for his presidential campaign.

Paul Ibe, media adviser to Atiku, announced the appointment in a statement on Thursday.

According to Ibe, their appointment takes immediate effect.

“Melaye is a politician and a member of the 8th Senate who represented Kogi West Senatorial district. He hails frim Ayetoro Gbede in Ijumu Local Government Area of Kogi State,” Ibe said.

“Bwala, on the other hand, is a legal practitioner, politician and public affairs analyst. He hails from Adamawa State.”

The Independent National Electoral Commission (INEC) fixed September 28, 2022 as date for the commencement of campaign for presidential and national assembly elections, while that of governorship and state houses of assembly will commence on October 12, 2022.