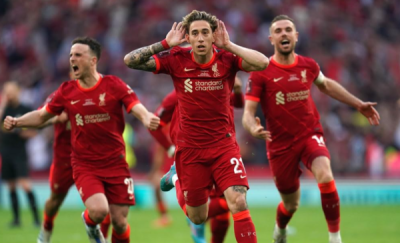 Konstantinos Tsimikas scored the winning penalty as Liverpool overcame Chelsea 6-5 on penalties following a 0-0 stalemate after extra-time in the 2022 FA Cup final on Saturday.

On the 150th anniversary of the competition, Tisimikas’ winning penalty sealed a domestic double for Liverpool who won the Carabao Cup against Chelsea in February, also on penalties.

In front of a record 84,897 fans, Liverpool started a front-three of Mohamed Salah, Sadio Mane, and Luiz Diaz while the much-criticised Romelu Lukaku led Chelsea’s attack.

The Reds were first to threaten with Luiz Diaz going close twice before Chelsea settled down and threatened through opportunities from Christian Pulisic and Marcos Alonso. Liverpool lost Salah to injury and failed to capitalise on a late chance in the half as both went into the interval all-square.

Chelsea started the better side in the second half with Pulisic again fluffing a chance while Alonso was only denied by the crossbar from a free-kick. Jurgen Klopp’s side almost won it late on through Diaz and Andy Robertson, both hitting the post as the game went into extra time.

Tired legs meant a penalty shootout was needed to determine a winner where Mane’s crucial miss was erased by an Alisson save on Mason Mount’s penalty before Tsimikas scored to claim hero status.

Following the win, Liverpool will shift focus to the daunting task of usurping Manchester City in the EPL title race and overcoming Real Madrid in the UEFA Champions League final later in the month as they look to seal an unprecedented quadruple of titles this season.