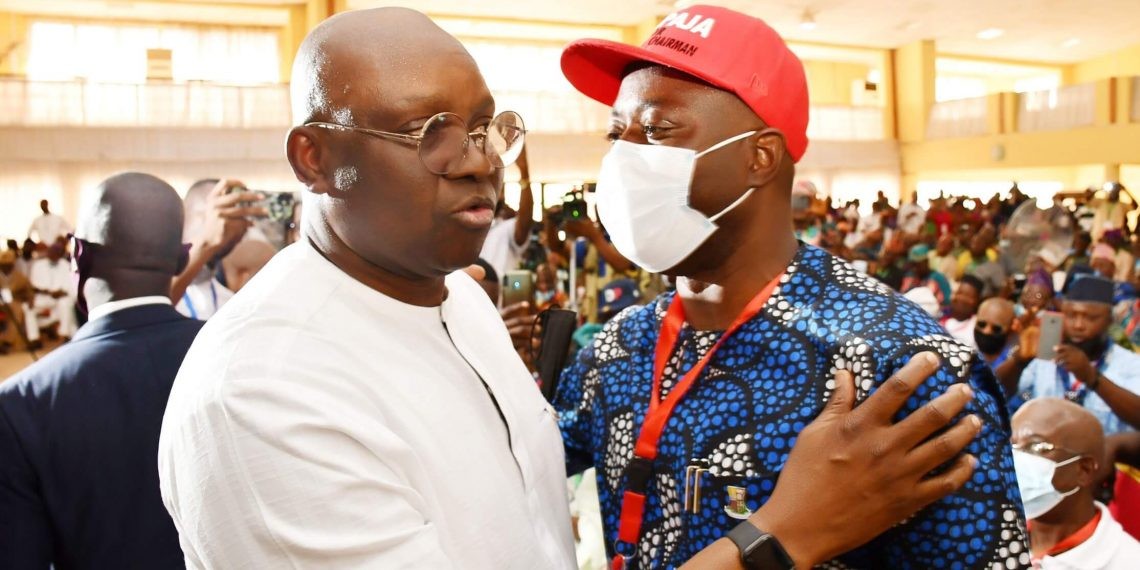 Former Governor of Ekiti State, Ayo Fayose, has described the Oyo State Governor, Seyi Makinde, as having a quiet look but deadly.

Fayose said this on a Channels Television programme: Politics Today, on Wednesday following the conclusion of the South West Congress of the Peoples Democratic Party.

Both Makinde and Fayose belong to the PDP and presented candidates for the chairmanship of the party in the South West.

While Makinde backed a former Deputy Governor of Oyo State and eventual winner, Taofeek Arapaja, Fayose was behind the candidacy of Dr. Eddy Olafeso.

Speaking against the backdrop of a viral video that showed some thugs threatening to kill him if he attends the PDP congress in Osun State and its eventual outcome, Fayose said those who made the threat were Makinde’s men.

He told Channels Television: “I have seen this video.

“What this gentleman was saying at the time, they came to the venue saying we are waiting for you here, we are going to kill you.

“This is the Chairman of the road transport workers in Oyo State.

“This is enough to show the whole world if Governor Makinde, a first-time two-year old governor, yet to be two-year-old governor, is parading characters like this, it simply shows the kind of people behind him.”

When confronted with the fact that the video also shows the character and quality of the people in the PDP, Fayose said it was shameful, stressing that thuggery is disgraceful for the party.

He said: “These same people came to Ondo and I told Governor Makinde.

“So I am glad the whole world is seeing this.

On the Congress, Fayose alleged that dead people were accredited to vote, adding that a former Majority Leader of the House of Representatives, Mulikat Adeola-Akande, identified those that were dead and sick on the accreditation list.

He said: “We compelled them to announce publicly how many people were accredited.

“They resisted that and said they will announce state-by-state.

“The norm is for you to announce accreditation and tell us how many people came and how many votes are expected.

“By the accreditation, they initially said Oyo State had 115 people list, 104 accredited.

“At the end of the exercise, the accreditation was 675, publicly announced.

“When you look at the alphabet, you will realise that a game was obviously going on.

“This is the game going on in the entire process.”

Fayose, who stated that he raised these objections when the irregularities were noticed, however, said his camp chose to overlook rigging because he was not ready to defect to another party.

He said: “I have accepted this result not because they won, but because I am one of the people that can’t defect to another party.

“I conceded not because they won.

“I conceded because the PDP is a bigger picture.

“I want to say that conceding does not amount to defeat.

“It is sheer exhibiting leadership.”

Boy, 2, shoots self, mum and dad in gun crazy America