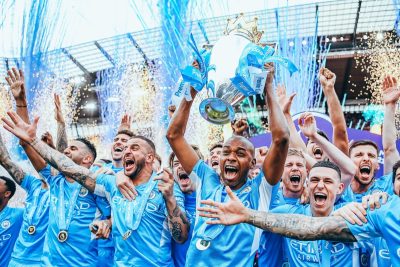 Manchester City won the English Premier League (EPL) title following a come-from-behind 3-2 victory over Aston Villa at the Etihad Stadium on the final day of the league.

Matty Cash and Philipe Coutinho had given Aston Villa a 2-0 advantage before Man City scored three times in five minutes late in the second half.

A brace from Ilkay Gundogan, a substitute, and Rodi helped City snatch victory from the jaws of defeat and with it the EPL title.

The introduction of Gundogan changed the dynamics of the encounter, with the German international heading into the net before Rodri drilled in the equalizer two minutes later.

Gundogan completed the comeback from Kevin de Bruyne’s cross to send the fans into frenzy mode as Guardiola’s side clinched the club’s fourth title in five years, punctured by the 2020 triumph of Liverpool, who finished second despite a 3-1 win over Wolves.