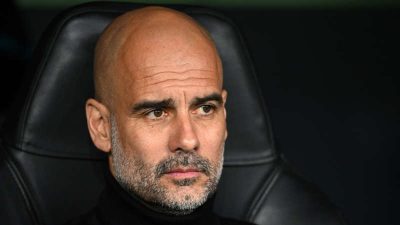 Pep Guardiola has told Manchester City fans to “behave” if they win the Premier League title on Sunday.

City are one point clear at the top of the table heading into the final game of the season against Aston Villa.

They are the big favourites to secure a victory and retain their title, but recent incidents of pitch invasions across English football have caused some conern that some supporters could cross the boundaries as an intense season comes to an end.

Asked about the prospect of fans invading the pitch should City win the title, Guardiola told reporters: “They have to be careful, what happened at Goodison and Port Vale and other games – the Championship semi-final – a lot of emotions and happiness.

“It is a dangerous situation and we have to try to behave as good as possible.

“Have the celebration at the right moment. It’s dangerous, I understand Patrick because you never know how people will react.”

The supporter was subsequently sent to prison for 24 weeks for headbutting him in the wake of the semi-final.

Then, on Thursday night, Crystal Palace coach Patrick Vieira had an altercation with an Everton fan as they invaded the pitch to celebrate their team’s survival in the Premier League.

The FA announced on Friday that there will be a review into rules surrounding pitch invasions as a result of this week’s violence.