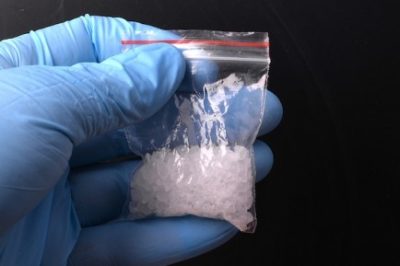 Nigeria has emerged over the past decade as a significant producer of methamphetamine (meth), a highly addictive and illegal synthetic psychostimulant drug. Since the National Drug Law Enforcement Agency’s (NDLEA) first discovery in Lagos in 2011 of a clandestine meth laboratory, 17 more have been dismantled elsewhere in the country. The quantity of meth seized has skyrocketed, rising from 177 kg in 2012 to 1.3 tons in 2017.

In late 2018, following the dismantling of a lab in Obinugwu village in south-east Nigeria, NDLEA Special Enforcement Team commander Sunday Zirangey reportedly said that meth was a serious threat and that Nigeria risked turning into a narco state.

Despite the acute health risks associated with its consumption – such as high blood pressure and cardiovascular-related illness – a growing number of young people in Nigeria reportedly take the drug.

A 2018 United Nations Office on Drugs and Crime (UNODC) report estimated that 89 000 Nigerians were taking meth. The chief executive of a Lagos-based pharmaceutical company told ENACT that this situation was mainly due to ‘the depressed economic reality the youth face in Nigeria’.

In 2016, the illicit market for meth took a new turn in Nigeria. Drug syndicates brought Latin American drug experts to Nigeria to help them set up large-scale meth labs, with similar characteristics to those found in Mexico. One industrial super lab was said to have the capacity to produce 4 000 kg of meth per week.

When the NDLEA raided the site in March 2016, they arrested four Mexicans and five Nigerians. The Mexicans were reportedly from Sinaloa State. Their arrest provided further evidence of a formal and successful alliance between Nigerian and Latin American cartels.

The growth of the illicit meth market in Nigeria has also been fuelled by the accessibility of precursor chemicals such as ephedrine, which is theoretically a controlled substance but is widely available in Nigeria.

In March 2019, the NDLEA seized 309 kg of ephedrine from members of a criminal network in Trans Ekulu Estate in Enugu and Festac Town in Lagos. According to a 2017 report by the UN Commission on Narcotic Drugs in Vienna, Nigerian criminal networks bring ephedrine in from countries in West Africa that import more than they need.

The UNODC’S Cheikh Touré said the ‘use and diversion of pre-precursors and other non-controlled chemicals signifies complex challenges in addressing clandestine meth manufacturing in Nigeria and West Africa’. Touré is the UNODC programme coordinator for the Economic Community of West African States Regional Action Plan to address the growing problem of illicit drug trafficking, organised crime and drug abuse in West Africa.

While a portion of the meth produced in Nigeria is consumed locally, most is reportedly exported to South Africa where 1 kg of meth sells for up to €10 000. It is also trafficked to South-East Asia, in particular Japan, where 1 kg can reportedly fetch €130 000.

As in Mexico where drug syndicates use violence to control the drug market, confrontations between drug gangs in Nigeria have increased. In August 2017, gunmen attacked a church in Ozubulu in Anambra State while looking for a rival drug gang leader, killing 13 people. An investigation revealed that the fighting was between two gangs operating from South Africa.

According to Touré, ‘Nigeria has built up expertise in relation to the detection and dismantling of clandestine methamphetamine laboratories’. He said stricter control by the national authorities on precursor chemicals and other psychotropic substances was being implemented.

However, despite the great efforts the Nigerian authorities are making to contain illicit meth production, the illicit market of the drug is yet to be eradicated. The government should therefore ensure an effective  regulation for the import of controlled precursors.

Meth has found its market in Nigeria
0
Share FacebookTwitterGoogle+ReddItWhatsAppEmail

JUST IN: Gumi establishes school for herdsmen in Kaduna

Nigeria Home To 9,100 Dollar-Millionaires, Worth $207 Billion

When will Tinubu speak for himself, by himself?

Why is Nigeria poor and backward if prayers work?

For a time like this, Tinubu is critical to our survival