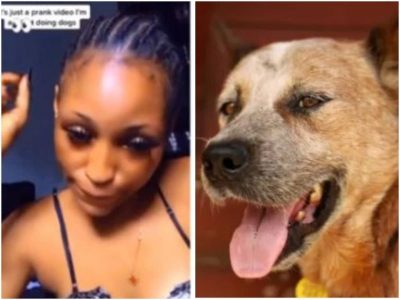 Her name was Mirabel which means “wondrous” in English. And living up to her name, what a wondrous life she led, albeit brief.

A wondrous life? Sure. Mirabel was indeed a wonder. When the stories of young ladies having sex with dogs in Dubai and posh residences in Lagos for cash broke the internet, Mirabel not only owned up to her story she owned it. She spoke with pride about how she had made it by having sex with dogs.

And she trended in no small measure. She is still trending, anyway, though now on a different plane of existence.

“What is the big deal there? I only slept with a dog, I didn’t kill somebody. You, in your life, you have done worse and besides, have you seen N1.7million before? As if it’s a big deal,” Mirabel revealed beating her chest for a job well done.

Mirabel also claimed that, contrary to what people think, she had never contracted any disease but was rather enjoying the money.

“And mind you, I’m not infected or anything. Stop dying on the matter, I’m enjoying the money”, she averred unabashedly in a viral TikTok video.

But following backlash from Nigerians, she released another video in which she recanted, saying her earlier video was a prank and begged for forgiveness.

“Guys I was just catching cruise. I didn’t sleep with any dog. My boyfriend just broke up with me; help me to beg my boyfriend. I’m sorry for the video I made, it was purely cruise.

“I can’t advice someone to be with animals. It was just a prank video, just cruise; you guys know Nigerians and cruise. I apologize to the public, please take my apology,” she said

Catching cruise? Nigerians did not accept her apology. Many thought that was a joke taken too far and took her second statement with a pinch of salt. It had many wondering if wondrous Mirabel hadn’t had sex with a dog, why did she confess she had had one and made big cash from it.

And days after the Nigerian police launched a manhunt for dog owners and ladies who sleep with dogs. Force Public Relations Officer, CSP Muyiwa Adejobi, made this known on his Twitter handle last Thursday in Abuja.

Adejobi said dog owners would be punished and prosecuted upon their arrest. He also vowed that security agents would not relent until ladies seen having sex with dogs in viral TikTok videos were apprehended and face prosecution to serve as a deterrent to others.

“They also have questions to answer. The offence is punishable under the law and thus condemned. We will soon apprehend the lady and others like her including the men, who have been involved in this criminal and barbaric act,” Adejobi maintained.

Still, the Nigerian police never apprehended Mirabel. But the Grim Reaper did. She went into hiding for a while until death apprehended her and gave a lie to her earlier denial.

Mirabel was indeed a wonder, as her name implied. She is trending in life, the same way she trended in life. The story now making the rounds on the internet is that she has died of an infection she contracted from sleeping with dogs at a private hospital in Yaba, Lagos.

Shocking? According to reports, an eyewitness disclosed that before her demise. Mirabel had been on admission after she collapsed and went into a coma. It was also revealed that she had confessed to the doctor that she had be having sex with dogs for over three years.

When tests were ran the results showed that Mirabel was suffering from canine brucellosis, a disease that can only be contracted from a dog. Canine brucellosis is a contagious bacterial infection caused by the bacterium, BrucellaCanis (B. canis).

“The lady had other underlying infections which were worsened by the presence of B. canis. She told my boss that she had been having intercourse with dogs for more than three years now,” the eye witness said.

However, what made Mirabel a wonder and her life wondrous, apart from the sheer audacity, the bravado, the brashness of her earlier revelation, are the timeline of her trends on the internet, the contradictions inherent in them, the drama, her rebuttal, her consequent silence and, finally, death.

“What is the big deal there? I only slept with a dog, I didn’t kill somebody,” Mirabel averred.” Then the backlash and she broke up with her boyfriend and her volte-face. “Guys I was just catching cruise. I didn’t sleep with any dog, she denied, chickening out.

And the police manhunt followed, then silence. And nobody heard about her for a while until her death. Still, no matter what may have happened to Mirabel, Many believe she, living up to her name, was indeed a wonder.

Not only has she trended, she will continue to trend for a long time. And her face will always prop up when issues about ladies having sex with dogs is on the table.

And nothing stops her again from surfacing on the internet to deny her death as she had earlier denied sleeping with dogs.

Nothing indeed is too difficult for Mirabel the wonder to do. If she could sleep with a dog, what else can’t she do?. (PM News)

Mirabel: The wondrous life of lady who had sex with dogs
0
Share FacebookTwitterGoogle+ReddItWhatsAppEmail