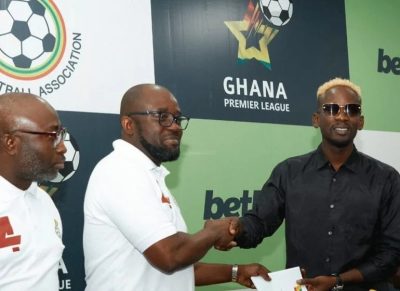 BetPawa, the online sports betting and gaming franchise owned by Mr Eazi, has been named as the headline sponsor of the Ghana Premier League.

The Ghana Football Association (GFA) announced the deal at the official signing ceremony in Accra ahead of the launch of the 2022/2023 league on September 2.

In a post on its website, the association said the three-year deal is worth $6 million — which is about N2.4 billion.

“We just signed an agreement with betPawa for an initial period of three-years. betPawa are investing a minimum of $6m over the period,” he said.

“From this money, we shall see the construction of a new pitch at the Ghanaman Soccer Centre of Excellence that will be called the betPawa pitch.

“From this deal, we are introducing a scheme called the Locker Room Bonuses. Here, all 30 or 40 players and the technical team of each winning team will receive bonuses immediately at the end of every game.

“Furthermore, part of the money would be invested in advertising, marketing and promotion of the GFA, betPawa relationship.”

“Excited that my company is the new sponsor for the Ghana Premier League #ProudCeo,” he wrote.

He has established himself as a household name in the Nigerian music industry.

The singer was in the news in April after he proposed to Temi, daughter of Femi Otedola, the billionaire businessman.