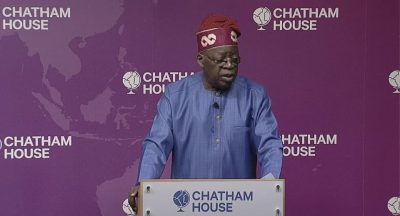 Nothing can be so mockingly debasing than going out for a political campaign only to be welcomed by a scanty crowd in a metropolitan city like Lagos. The PDP candidate, Atiku Abubakar, was in Lagos this week and what he saw was not only palpably discomforting, it also revealed many lows about his chances in the 2023 general election. His Lagos scanty crowd was being covered up by his publicists through a deliberate distraction, using Asiwaju Tinubu’s appearance in London as a subject of scorn just because Atiku was not welcome in Lagos. Reno Omokri, Atiku’s diaspora attack dog, was earlier humiliated and had to endorse Asiwaju Tinubu when he realised that the audience at the Chatham House was heavily mobilised to drum up support for Asiwaju. Sensing danger, he quickly got himself synchronised with the temperament of the charged crowd, like a typical smart Alec, and got beaten at his game. He was jumping up and down in London, while Atiku was addressing a very limited crowd back home in Lagos; an indication that Nigerians are now wiser. Such a humiliating sparseness in Lagos was more than enough for Atiku to have a rethink about his aspiration. Typical of their familiar style, they almost made us gloss over this disgraceful show of rejection, until certain persons posted pictures of the audience. His supporters feasted on Asiwaju Tinubu to shift attention away from a dismal outing in Lagos. But we saw it; and the message has been registered.

Away in London, Tinubu’s Chatham House chat was symbolic of the man’s leadership style. The man is a team player; his style afforded us, the opportunity of assessing those around him, their intellect levels and expectations while in office as we watched them dissect a number of issues to set the roadmap for his COLLECTIVE INVOLVEMENT type of leadership. I am yet to reconcile why some PDP and Obi-dient adherents had issues with Tinubu’s approach to answering questions just because he called on some of his key party chieftains to respond to some of them; and this he did, after he had delivered a most brilliant speech. Anyone who watched his introductory delivery and footnotes and still quarrels with Tinubu’s understanding of the issues, and style, is either deliberately shifting the goalpost, or, to say the least, a purveyor of plain mischief. I watched the outing from the beginning to the end; his comportment, calmness, body language, mannerism, his use of language and content were most cerebral. Tinubu’s traducers would never wish to see him in such cerebral elements. They would rather have him mumble incoherent monologues to push a wrong narrative and profiling of THE MAN TO BEAT in this coming election. They were waiting in the wings to see him gaffe. Disappointment was their portion as he flowed all through the discourse. PDP’s attack dogs still had to put together a response, just to take attention away from their Lagos rejection.

For sure, Tinubu is a team player. This is the leadership style he displayed even at a much younger age and lower level; as Governor of Lagos state. Is being a team player a dangerous perspective to modern and contemporary leadership orientation? The answer is No. The function of a president is to preside over the affairs of the nation. In doing that, he requires men and women who share in his perspectives and ideologies to work with. Getting his lieutenants and indeed people everywhere to understand his style of leadership at this stage of his campaign is important to unveil his persona. His style is called COLLECTIVE INVOLVEMENT, a sense of inclusion and participation. I found some responses I have read very ludicrous, mischievous and utterly laughable. Particularly, the comments by one Oseni Rufai, of the Arise TV got me wondering if some professionals actually understand the tenets of journalism. I see Rufai becoming more of a partisan attack dog than a NEUTRAL presenter or anchor of programs. He appears more like a hireling recruited to engage in underhand dealings, particularly to de-market Tinubu at every opportunity just to justify a likely backroom package. Arise TV does not wear the shape of a Fox News in the USA. Fox News, just like the name, trivialises serious discourse and turns them into entertainments to make some money as they smile to the bank. If anyone is desirous of watching serious news, I recommend CNN. For some time now, Oseni Rufai has been running down Tinubu’s aspiration. He breathes his sentiments into every discourse, pours his hurling on the meal and flaunts his arrogance, with a straight face; as if to say, go to hell.

I have taken pains to understudy some of his utterances and perspectives and find them very peripheral and without depth. He appears to be a man who is quarrelsome and disorganised, or likely to have some domestic issues, causing him to come on air everyday, to pour out misplaced anger. Trying to mimic Rueben Abati in terms of profound delivery, he exposes his sentiments against the Tinubu presidency as he usually caresses his TV guests that are supporting other presidential candidates. Rufai should note, and very clearly too, that Arise TV is not the same as the Radio station where he initially worked; it is a global platform that should convey serious contents, and not a place where “I will call the Governor” attitude should fly. That incident alone exposed Rufai’s psychological and likely psychiatric problems and that is something to be concerned about. Having committed a traffic offense, he was grandstanding as he was intercepted by the authorities. He tried to show LASMA officials and the world that he knows the Lagos State Governor and was threatening to call him for his hoped “short-cut”. This is the mentality, and indeed the sad reality that has detained us in Nigeria for years; sadly, such a mind is allowed to airtime as a journalist. One of the reasons Nigerians should vote for Asiwaju Bola Ahmed Tinubu is that he is poised to quash this kind of mindset among us. If Rueben Abati has not succeeded in reining Rufai in, to follow the real dictates of professional broadcast journalism, a more intense approach needs to be sought. Maybe Rufai is easily swayed by his “ngwo-ngwo” emotions, or is a man who had some kind of retardation growing up. Either way, he would need treatment. Does he remember that in 1999, Chief Obasanjo got several, undiluted media harassments, and still became the elected President?

By Tinubu asking some of his team members from his brilliant stock to respond to some of the questions does not amount to any faus pax or gaffe. I am yet to see anyone who can school me on the strategic choices that any candidate can make. A President’s primary take home lesson is to be jack of all trade, master of all; delegating responsibilities and coordinating and collating outcomes. Why would it be of utmost importance to have such brilliant men and women as Tinubu has around him if they couldn’t answer for him when asked questions? He listens to a coterie of appointees, weighs their contributions and takes responsibility and or credit for the success or otherwise of any actions taken on the issue(s) under scrutiny. Having listened to Asiwaju Tinubu in Lagos when he spoke elaborately with members of the Organised Private Sector, in Kano, Owerri, Minna and Lafia, during his Townhall engagements, it will be foolhardy for anyone to think Tinubu cannot interrogate issues and speak to them. His style in Chatham House was what he chose for that outing. Did he not appear on BBC Focus on Africa alone? Did he not perform stellarly? His responses to question were lucid, unambiguous and well articulated, and his poise was statesmanly; he was simply scintillating.

He exhibited a remarkable departure from others; others like a unifier who cannot unify his own party. Tinubu subsequently had a robust engagement with some Nigerians in London; and then, he responded to their enquiries by himself.

I would have queried his style, if those who were chosen to respond to some of the questions didn’t discharge that responsibility well. They all spoke very well, articulated the roadmap, and brought clarity to how Tinubu will shape the challenges facing our country. The Chatham House engagement was open; hence the Oseni Rufais of this world cannot say Tinubu went on a medical tourism; the most convenient thing to say, in their bid to continue to ram it down our throats that Tinubu is this, Tinubu is that and everything negative. The only reason why Tinubu is lambasted today, is simply because he is THE CANDIDATE TO BEAT; so, those hirelings who may have been given backroom assignment will always look for flimsy opportunities to justify their pay. We live in Nigeria and are familiar with such undercurrents. I just hope Oseni Rufai and his likes will not plunge Arise TV into an avoidable cul-de-sac in the nearest future. Once the perception sets in as a platform of anything goes, it will certainly rub off on its credibility. For me, it was most heartening to see Asiwaju Tinubu deliver his speech in Chatham House on Monday, 5 December 2022. Let other candidates go there and showcase their own style if they so desire.

-Kassim Afegbua is a former spokesperson to Atiku Abubakar