My encounter with AbdulRahman AbdulRasaq, governor of Kwara state 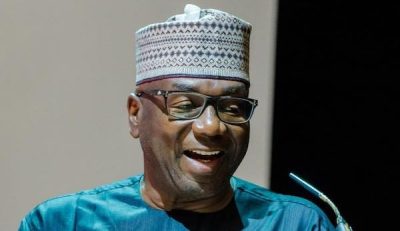 His Excellency is my friend and brother. I met him through a mutual acquaintance who, over the years, has won his trust and confidence. Since then, I have had some verbal interactions with His Excellency bothering on his vision for Kwara and the huge impact he has been making in the state, especially in education and health.

The indices are incredibly amazing especially if you confirm with what was on the ground at the time of his takeover.

In our conversations, I mentioned to him that his communications team were doing him a lot of disservice. States that have not achieved this level of engagement continue to shout all over the place, while he remains almost silent with his.

His achievements in health, especially, show a remarkable almost 300% improvement in the area of human capital development in the sector.

Anyways, I invited him over to see my play ‘Babakekere’ and he accepted to be my special guest. But due to several postponements by the Lagos state government, he could not make it.

Then the opportunity for Emir Sanusi came up and I invited him also. He said he will make it and I smiled with a little doubt.

Emir Sanusi was received with huge acclaim in both Lagos and Abuja. Pulling in a lot of dignitaries and over 3000 Nigerians combined.

It is the biggest play this year with over 36 corporate sponsors including Access Bank, Zenith, First Bank and Sterling to mention a few.

So there was I sat at the Agip Recital Hall of the Muson Centre tired out. The first show had just closed and the hall was filled to the rafters.

Khalifa Muhammadu Sanusi II had taken the stage at the end of a brilliant performance to hold the audience spellbound with a speech that created a media frenzy all over the country.

The second show had immediately filled up and we were struggling with hundreds who wanted to get in but couldn’t.

The crowd was huge. The love for the 14th emir of Kano was beyond belief. Nigerians from all hues came out and at that point, our divisions paled into insignificance. Sanusi was now a unifying symbol and his weapon was the truth.

Tired and exhausted, I sat in a booth set up by Artsplit — a neo-classic platform that distributes modern Nigerian art — trying to catch my breath.

All of a sudden, a dark man with average height in a brown kaftan and a mask on his face walked up to me and greeted me. He looked quite simple and almost nondescript. Thinking it was one of the many admirers of the Khalifa who had come from very far and couldn’t get in, I shooed him off politely.

He went and came back: “Edgar, I am here. I have tried to enter with no success”. I looked up at him and said, “sorry we are full”.

By this time, we had started refunding people and I wasn’t liking it. I hoped and prayed that this gentleman would quietly go home to his family and not ask for a refund.

He still stood there looking gently at me. So I said: “Ok sir, do I know you?” And he said; “Yes, you invited me”.

I said; “ok, can you take off your mask”. He did and I still did not recognise him. Over 3,000 people had come to shake and hug me in the last two days and I was already jaded. So it wasn’t strange that I didn’t recognise him.

So he opened his phone and the phone was the first sign that this was not just an ordinary ‘Mallam’.

He showed me our chats, the pictures of the Abuja play that I had sent to him and where he saved my number as Joseph Edgar.

Then it dawned on me. I opened my mouth and covered it and exclaimed: “Ohhhh my God! Oh my God! Your Excellency,” I screamed.

He smiled very gently and hugged me. I held his hands and took him into the hall and begged a gentleman to vacate his seat.

The gentleman wanted to protest and I said; “sorry, this is His Excellency, the governor of Kwara state”. And he said, “wow, I’m from Kwara state. It’s ok”.

After the play, I escorted him out and asked why he appeared like this. He responded by saying: “Duke, there is no need for noise”.

I agreed. I walked him to the lone Toyota Camry parked outside the Muson. The area boys not knowing who he was converged on me instead of him.

I just smiled to myself and said; “if only they knew”.

As he sped off into the Lagos night, I wondered aloud: What manner of man?