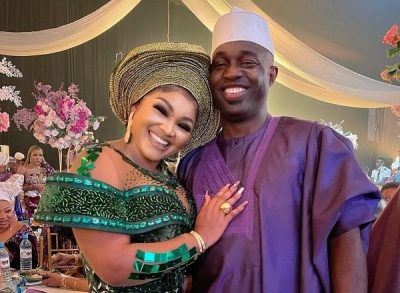 Mercy Aigbe, the Nollywood actress, has addressed the criticism trailing her marriage to Kazim Adeoti and separation from Lanre Gentry.

Aigbe has been in the public eye since she unveiled Adeoti as her new partner.

In the heat of the reactions on social media, Gentry had shared an old photo of himself, Aigbe, Adeoti, and an unidentified woman.

The photo had further fuelled speculations that the film star and Adeoti were dating while she was still married to Gentry.

On Wednesday, the matter was among the topics discussed on ‘Your View’, a programme on Television Continental (TVC).

But on Thursday, Morayo Afolabi-Brown, the show’s host, disclosed that the actress reached out to her after the programme to debunk some claims about her marriage to Adeoti.

In the message, Aigbe said Adeoti and Gentry were never friends as rumoured in some quarters.

The movie star also said the picture shared by her ex-husband was on the occasion of Adeoti’s birthday years ago.

The 44-year-old said Adeoti had invited her and other movie heavyweights to the occasion.

Aigbe also said she had attended the event alongside Gentry at the time.

“Mercy Aigbe had called me because she felt that we were misleading the direction of our conversation. According to her, her current husband which she recently got married to and her ex were never friends,” Morayo said.

The TV host also quoted the actress to have said that there was nothing wrong with her marriage to Adeoti since he is a Muslim.

“And secondly she told me that ‘Morayo the man is a Muslim and he is entitled to more than one wife. Yes he had issues with the first wife so he is not marrying her as a second wife’ And she has accepted to be a second wife. Doesn’t she deserve to be happy?

“She was really upset that people were going to her DM threatening her kids and this has nothing to do with her children.” (The. cable Lifestyle)