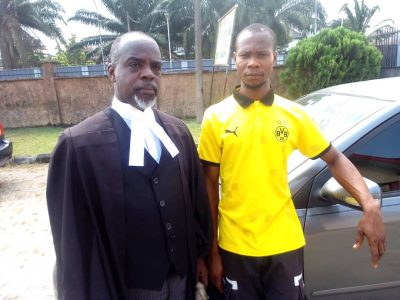 A 27-year-old man based in Delta State has said Governor Babajide Sanwo-Olu of Lagos State is his father.

Speaking with newsmen at the premises of High Court 2 sitting in Effurun, Uvwie Local Government Area of Delta, the man who identified himself as Emmanuel Sanwo-Olu said his mother told him that the Lagos governor is his father.

The father of three claimed that he is 100 percent sure that “I am the son of Governor Sanwo-Olu.”

He said his mother had only him for Governor Sanwo-Olu before she married another man who she had other children for.

“I just want to see the man as my father,” he said, adding that, “For the past twenty seven years, I have not seen my father”.

Emmanuel Sanwo-Olu said he does “casual jobs” to survive with his wife and three kids.

Counsel to the claimant, Mr. John Aikpokpo-Martins Esq, said the matter was before the court. The case of Emmanuel Sanwo-Olu, his client, against the Lagos State Governor, Mr. Babajide Sanwo-Olu.

The legal practitioner and former 1st Vice President of the Nigeria Bar Association, NBA, noted that the matter came up for hearing today.

He said, “The lawyers to Sanwo-Olu, Templas law firm, had earlier filed a motion to strike out the matter on the grounds that the governor was not ready to wave his immunity.”

Aikpokpo-Martins said he had also filed an application seeking an order for the governor to wave his immunity to come for a DNA test.

According to the legal practitioner, “We are expecting that he will do that if indeed, he is sure that he is not the father of the claimant. But unfortunately, he invoked his immunity to say he is immune against law suits and he is not ready to wave it.

While pointing out that the matter was for hearing, Aikpokpo-Martins said, “We ourselves, we are not ready. I pleaded with the other side to give us time to see if this matter can be resolved. Resolved in the essence that if the governor will just wave his immunity and come for a DNA test.

“If he is sure that he is not the father of the boy, why should he be afraid of submitting himself to a DNA?

“We have situation where somebody that’s the claimant who wants to be aware of who he is but he has stated clearly in the case that, he has no family. His mother’s family is just half a family. They all know that he is the child of a woman and we know culturally, the child of a woman does not belong to that family. His rights are curtailed and things like that. And he is already having children. They need to know who they are.”

Aikpokpo-Martins urged the Lagos State Governor to validate the paternity of his client saying, “nothing more to it.”

“From now till the next adjourned date which is January 17th, let’s see whether morally his conscience can be appealed to or bring himself forward for a DNA text with Emmanuel. It does not need to be in the press. It can be done quietly. Nobody wants to actually make noise with him but he has actually extremely proven very difficult to scientific verification with the claimant.

“If it happens that Emmanuel is not his son, he goes home. It’s a very simple thing. But if it’s his own, then the young man will be happy that at least, he knows wherw he comes from. By then, he now has the power and authority to go into the Sanwo-Olu family as a member of the family.” (Daily trust)