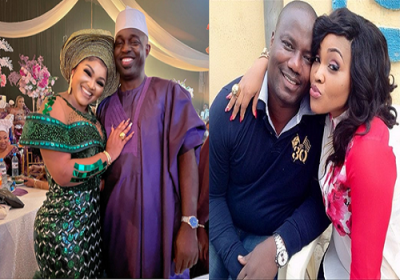 Popular actress Mercy Aigbe has cleared the air on the relationship between her new man, Kazim Adeoti and ex-hubby, Lanre Gentry.

Mercy’s union with the new lover has continued to breed controversy and spark social media discourse in various quarters.

In a recent episode on ‘Your View’, the chief host, Morayo Afolabi alongside the co-hosts were having a discussion on the ‘Hot Topic; tagged: “Nollywood actress Mercy Aigbe marries ex-husband’s friend.”

During the course of the show, the chief host revealed the movie star has been trying to call her but hasn’t been successful.

She added it was important to hear from Aigbe concerning the topic of discourse which has been making waves on social media.

“It was Mercy Aigbe that called me just now. But I can’t get her message, she said she sent me a message”, Afolabi said.

“It will be great to hear from her directly because it’s about her happiness. We are not here to judge but to learn from each other’s experiences.”

The text message popped up immediately afterward as indicated by Morayo who went ahead to read it out to the viewers.