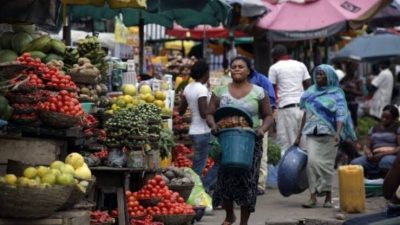 Nov 30, 2021
The prices of food items continue to soar across major markets in Lagos, as traders complained of low sales amid declining purchasing power.

This is according to a market survey conducted by TheCable.

Recently, the Food and Agricultural Organisation (FAO) warned that global import bills could reach record levels in 2021 — a 14 percent jump from the 2020 record.

The food outlook report said the spike in global food prices would weigh heavier on the side of low-income countries like Nigeria.

Joseph Aleekwe, an elderly trader, who started his business with N7000 in the 1990s at the Alaba Rago market, Lagos, reminisced on “good old days” when he started trading.

“I started my business with N7000. I rented a shop and stocked my shop with food items with that amount of money,” he said.

For traders at the popular Iyana Iba market, most prices of food items have escalated in the last few months, thereby diminishing purchasing power with them witnessing low sales return.

“The prices of items increase every day. If you come to the market tomorrow, you will not get the same price you will get today,” some of the traders said.

“We don’t know what will happen as we are entering a festive season now. For most of us, we are even looking at how to get more money to buy items and sell during the season.”

Staple foods on display at the Alaba Rago market.

A crate of medium-sized eggs jumped from N1200 to N2000, year-on-year, representing a 67 percent increase.

Shansu Salisumukhtar, a trader at Alaba Rago market, told TheCable that the decline in the prices — after it soared to N100,000 earlier in the year — could be attributed to the inflow of newly-harvested beans into Nigerian markets.

“New beans is in the market… that is why the price is going down,” he said.

WHY FOOD PRICES ARE INCREASING

Ogunremi said the Central Bank of Nigeria (CBN) had risen to the occasion in terms of financing and input supports.

“There’s been improvement in terms of financing. CBN has been doing quite well,” he said.

“But you will look at the level of insecurity which has affected transportation of food, farmers have been killed and all of that. You also consider the impact of Covid-19 on the agricultural value chain so far.

“There’s quite a lot of disruption in the agricultural sector.

“When you put all of these together, you will then understand why we have these escalating prices.”

Ogunremi said that Nigeria is not producing enough domestically and that until the underlying issues causing dwindling agricultural production in Nigeria are dealt with, food prices will keep rising.

“If we still have a low level of production, you would not see any major impact, whether next year or two years to come or three years to come,” he added.

“The situation would then be that food prices will come down when we have certain factors happening at the same time.

“The factors would be around more financing in the agric sector, improvement in security, access to the dollar at a much more affordable rate for the price of food items.

“And if we are able to beat the effect of climate change on the agricultural production in Nigeria, we can see all these things happening at the same time, then I can say that results can equate the plans.”

According to the National Bureau of Statistics (NBS), food inflation, an increase in the cost of food items, jumped to 20.75 percent in October 2021. In January and February, food inflation was 20.57 percent and 21.79 percent, respectively. In March, it peaked at 22.95 percent, declining to 22.72 percent in April.