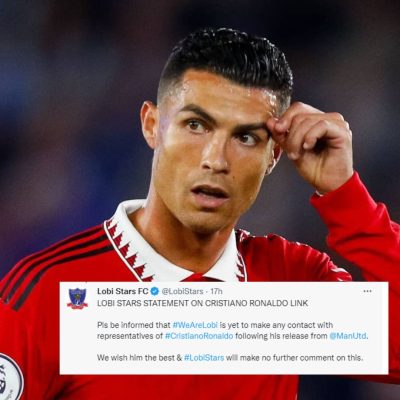 Nigeria Professional Football League side, Lobi Stars F.C., have stated that they did not contact Cristiano Ronaldo’s representatives following his departure from Manchester United.

This was revealed in a statement released on Wednesday via its Twitter handle.

They said, “LOBI STARS STATEMENT ON CRISTIANO RONALDO LINK. Pls be informed that #WeAreLobi is yet to make any contact with representatives of #CristianoRonaldo following his release from #ManUtd.

We wish him the best & #LobiStars will make no further comment on this.”

Manchester United announced Ronaldo’s exit from the club on Tuesday.