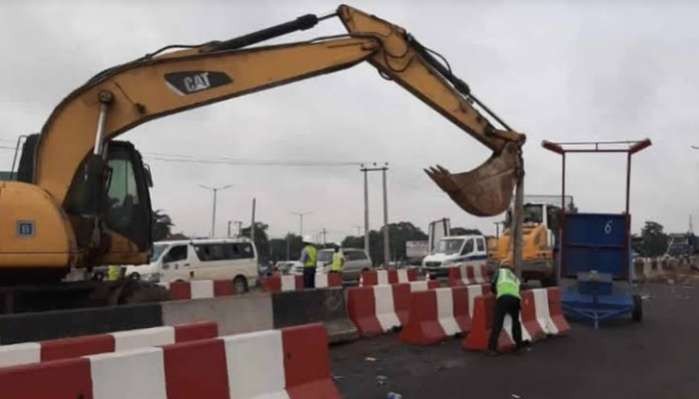 The Federal Controller of Works in Lagos, Mr Olukayode Popoola, says the Kara bridge on the Lagos-Ibadan Expressway is safe for use.

Popoola on Monday told newsmen after inspecting the bridge that the structural integrity test revealed that the bridge was strong and safe for use.

“The integrity test that we conducted on Kara bridge was okay. I am just leaving the site now, commutters should not be afraid.

”The bridge is still standing strong, it is safe. It was not damaged by that fire incident.

“We are laying ashalt on it today, that is on about 50 metres of the road surface that was affected.

“We will scarify the 50 metres and lay ashalt back on it this afternoon. Immediately we complete laying the ashalt today, we will open the road to traffic,’’ he told newsmen.

Popoola, however, appealed to motorists and truck drivers to drive with caution to avert accidents.

“That accident that caused the fire would have been avoided if the two drivers were more careful.

“Motorists should drive more carefully on our roads and not only construction sites for safety.

”Even when the roads are good, drivers should drive with care to stop avoidable accidents,” he said.

Newsmen recalls that traffic was restricted on the highway on Friday for tests to be carried out on the bridge.

The structural integrity of the Kara bridge came under scrutiny after two tankers carrying petrol collided on the bridge inward Lagos on June 21, resulting in an inferno.

Dr. Dre’s wife files for divorce after 24 years of marriage

Face masks should not be replaced with face shields – NCDC