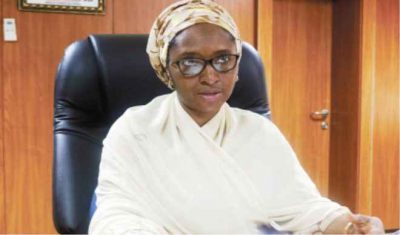 The federal, states and local governments on Thursday shared N698.7 billion as statutory allocation from the federation account for September 2018.

The funds were distributed during the meeting of the Federation Accounts Allocation Committee (FAAC) held in Abuja on Thursday.

The meeting was the first presided by the Supervisory Minister of Finance, Zainab Ahmed, who underscored the need for the three tiers of government to save.

“In view of the situation of the economy at the moment it is important to restate the need for governments at all levels to maintain transparency and instill a saving culture for the rainy day. We have to save, not only saving for today, but for tomorrow,” the minister said in a brief introductory remarks.

A communique by the Technical Sub-Committee of FAAC after its meeting held on Wednesday and signed by the Accountant-General of the Federation, Ahmed Idris, gave details of the revenue allocations.

According to the document, gross statutory revenue for the month of about N569.281 billion was lower by N57.858 billion than about N627.139 billion shared in August.

Total distributable revenue for the month was about N698.7billion.

Details from the document showed crude oil export sales increased by 0.17 million barrels resulting in increased revenue earnings for the month to the Federation of $8.48 million.

However, the average unit price per barrel dropped marginally from about $77.10 tto $75.69.

Due to the shutdown of pipelines in the Niger Delta during the month, production shut ins were reported at various locations in the region.

The breakdown of the figures showed gross revenue realised from VAT at about N79.154 billion as against N114.542 billion realised in the preceding month, a decrease of about N35.388 billion.

The Federal Government got about N277.197 billion, the States about N172.810 billion and local governments about N130.534 billion, while the nine oil producing States received about N52.596 billion as 13 per cent derivation.

About N15.572 billion was paid to the Federal Inland Revenue Service (FIRS) as refund for cost of collection/transfer.

Meanwhile, the report of the committee on the Excess Crude Account (ECA) earlier scheduled for presentation was stepped down to allow the committee to rework and represent it at the next meeting.

Spokesperson to the minister, Paul Abechi, told reporters the next FAAC meeting is scheduled during National Council of Finance and Economic Development (NACOFED) proposed for November 28 in Kaduna. (Premium Times)

Abaribe, other leaders against Buhari are mere paper tigers – Adesina