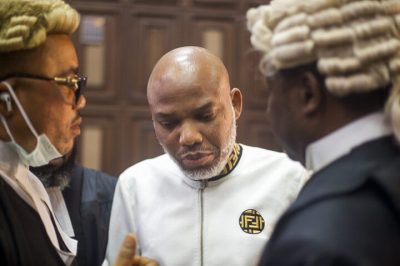 Nnamdi Kanu, leader of the Indigenous People of Biafra (IPOB), has written a pre-action notice to Abubakar Malami, attorney-general of the federation, over alleged defamation.

In the notice signed by Aloy Ejimakor, special counsel to IPOB, Kanu claimed that Malami defamed him by saying he jumped bail.

In June 2021, Kanu was arrested and brought back to Nigeria from Kenya by the federal government.

The IPOB leader was granted bail in April 2017 for health reasons but skipped bail after flouting some of the conditions given to him by the court.

The legal representatives of Kanu had repeatedly claimed that the IPOB leader did not jump bail but fled the country after soldiers raided his father’s residence in Abia state.

Since June 2021, the IPOB leader has been in custody of the Department of State Services (DSS).

On April 8, 2022, the trial court struck out eight of the 15 counts in the terrorism charge. The court of appeal later quashed the remaining seven counts on October 13.

Delivering judgment, a three-member panel of the appellate court led by Hanatu Sankey held that the federal government flouted the Terrorism Act in the extradition of Kanu.

Reacting to the verdict, Malami said Kanu was discharged not acquitted, while reiterating that issues on why the IPOB leader jumped bail remain valid for judicial determination.

The federal government subsequently filed an application seeking to stay the execution of the appellate court’s judgement, and the court granted the request.

While the appeal and a cross-appeal by Kanu is pending before the supreme court, the federal government approached the trial court to file an amended charge marked FHC/ABJ/CR/383/2015.

Amid the legal fireworks, on October 26, a federal high court in Umuahia, Abia state, ordered  the federal government to return the IPOB leader to Kenya.

The court also ordered the government to pay Kanu N500 million as damages for his illegal abduction and violation of his fundamental human rights.

‘KANU DID NOT JUMP BAIL’

In the pre-action notice, Kanu said the comment of the attorney-general that he jumped bail is designed to “malign and intimidate” his personality.

“To be sure, your said libelous utterances were circulated and read by millions of people around the world, particularly in Abia State and Nigeria where our client has many friends, family, colleagues, admirers, mentees, well-wishers and millions of followers.

“Your said libelous publications have seriously injured our client’s character, credit, reputation and integrity. You have by your defamatory actions brought our client to scandal, contempt, odium, public humiliation and embarrassment for which he is entitled to monetary damages, injunctive relief, apology, among others.

“In view of the foregoing, our Client claims against you in the following particulars:

“b. An unreserved personal letter of apology, to be prominently and boldly published full-page in two Nigerian Newspapers of national circulation, namely: Guardian Newspaper and Sun Newspaper.”

Atiku rejected Jonathan’s plea, refused to support him in 2015 – Wike