Nobody would steal public funds if I’m elected president.. I swear! – Atiku 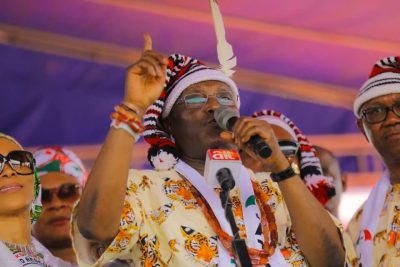 Atiku Abubakar, former vice-president, says he would ensure that public money is not pilfered if elected president in 2023.

Atiku spoke during a consultative meeting with delegates of the Peoples Democratic Party (PDP) in Port Harcourt, Rivers state capital, on Saturday.

Reiterating the “priority areas” he listed during his formal presidential declaration, Atiku lamented the poor state of education in the country, alleging that the money meant to stabilise the sector is being stolen.

“I will make sure that our educational system is very well looked after. Today we have all our public universities closed down for several months,” he said.

“Our children have been out of school. Not because we have not instituted institutions during PDP to make sure there is enough funding for these institutions.

“But because they are stealing the money. I will make sure nobody steals public money, I swear.

“After dealing with education, we can now look at restructuring the country.”

Atiku said the APC has taken the country “from top to bottom”, and the people keep suffering.

He accused the ruling party of being a one-sided government, saying this has caused disunity in the country.

“Can you govern without uniting people and bringing peace? It is very important,” he said.

“Today, we have found ourselves in a similar situation because the APC government has been a one-sided government and therefore, there is disunity, because of disunity now we are facing insecurity all over the country.

“That was why in my declaration speech, I said number one item for me is to make sure I unify this country.

“Unless we restore law and order and peace, we cannot do anything. After restoring security generally, we will now go to the economy. We have the experience. We took Nigeria from the bottom to the highest economy in Africa.

“Now APC has taken us down to the bottom, top to bottom. That is why I just can’t understand how somebody can vote for APC in this country because we have suffered and we are suffering.”

He appealed to the delegates and stakeholders to rally around the PDP to ensure the party is united as the 2023 elections draw near.

“PDP must unite to win this time. It does not matter the outcome of the convention. Let us unite and win,” Atiku said.

Nobody would steal public funds if I’m elected president — I swear!
0
Share FacebookTwitterGoogle+ReddItWhatsAppEmail