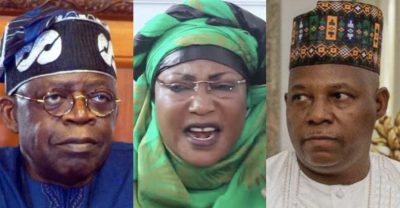 Some northerners urging on All Progressives Congress (APC) presidential candidate Bola Tinubu do so because they want his running mate Kashim Shettima to replace him as president, said Naja’atu Mohammed.

Ms Mohammed, a former campaign director who parted ways with the APC days ago, revealed this in a recent interview with This Day newspaper.

In her latest jab against Mr Tinubu’s camp, the Kano-born politician disclosed that some supporters of northern extraction, who seems to be ignoring the APC flag bearer’s obvious health frailties are in fact banking on his eventual incapacitation so that Mr Shettima could assume office as constitutionally stipulated.

“They just want to push him for them to be the president. It’s not even in his interest,” Ms Mohammed asserted. “Some people from Maiduguri called me today (Monday) asking, ‘Hajia, why did you do this? You have now punctured our interest. Our son is going to be president, and you’re talking like that? After all, look at Tinubu; he cannot do it. We’re all for Kashim. You have not done well for us.”

Ms Mohammed recently resigned as director of civil society engagement in Mr Tinubu’s campaign. According to her, she could not serve the country’s interest in clear conscience if she continued to support the former Lagos governor.

She further clarified that Mr Tinubu’s health is in an embarrassing state which is grossly unfit for public office.

“I sat with him for two hours in London; when you talk of green, he will give you an answer of red. He can’t even decipher. He has very serious dementia; I believe he has Alzheimer’s because he cannot even hold a cup of tea,” she said.