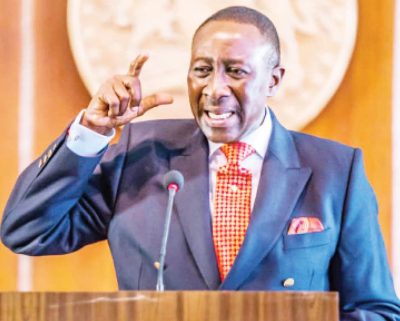 The National Security Adviser, Major Babagana Monguno, says no amount of security threats will stop the 2023 general elections from taking place as planned.

On the continued attacks on INEC offices particularly after he had promised to deal decisively with the attackers, the NSA said security agencies were currently on the trail of the attackers.

On whether he would be able to secure next year’s elections, he said: “I hope your question is not a trap, but the elections will take place, we’ve said that. By the grace of Almighty, they (elections) will take place in an atmosphere bereft of intimidation and violence, we’ll try as much as possible to maintain that.

“For those people who’ve been going around burning offices, killing people, the security agencies have been given that instruction. Visit them with all you have and let them understand that there are consequences for bad behavior, that we’re determined. Everybody is a Nigerian, everybody is free to do whatever he wants to do, but don’t cross the line and move into another person’s territory.

“That you want to destroy government property, property set up by taxpayer’s money? How dare you? Who the hell are you? In a normal society, this is not tolerated, and I believe we’re normal society, how can you just on your own, so please, let’s forget that one.”

He said the security agencies would soon take necessary measures if such action continued.

He said President Muhammadu Buhari had given clear directives that the 2023 elections must be free, fair and credible.

“The people’s will must prevail. What happened in Anambra or Osun and Ekiti is what we want to happen all over the country. Let the people choose their leader, whoever they want, then later, they can decide.

“But in the process of electing who governs them, we must be mindful of the fact that there are people hell-bent on forcing on bullying and cornering their opponents. It’s not even a function of numbers or a function of money. It’s a big problem. It’s a problem that’s also linked with complex. Because if you’re really who you’re, you don’t need to hire thugs.

“If you cannot restrain your thugs, the government will do that for you. And you’ll be called on the carpet and you’ll answer questions. We have a lot of politicians and I’m not being specific about any politician or party. This virus has to be contained.

“I know we have a lot of political thugs, straining at the leash, foaming at the mouth, desperate to bite and taste blood.

“But we’re going to apply everything within the powers of the government. And I’m not saying we’re going to just operate in a manner that’s not regulated.”

Monguno underscored the need for all Nigerians to set aside ethnic, religious, and tribal differences to overcome the challenges of insecurity facing the country.

He said Nigeria security threats were mainly due to interactions of multiple internal issues driven by political, economic or social grievances.

He said external developments within the West African sub region and beyond had impacted on Nigeria’s internal security dynamics.

On the Indigenous People of Biafra (IPOB), and its militia wing, the Eastern Security Network, the NSA said some of the group’s key commanders, including IED experts, had been arrested and major camps destroyed.

Monguno said over 82 oil tankers involved in various crude oil and product theft were arrested, theft of over 3 billion barrels of crude oil prevented and 11 million litres of petrol and diesel recovered.

He said the crude oil thieves would be prosecuted.

Biden hints on NATO-led talks with Moscow, if Putin is “willing”

World Cup: Why Japan’s controversial goal vs. Spain stood despite appearing to go out of play