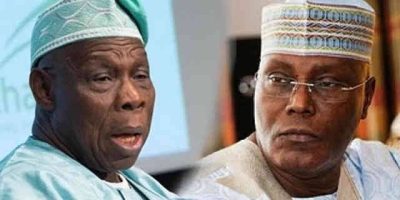 Former President Olusegun Obasanjo has questioned the decision of his former party, the Peoples Democratic Party in picking Atiku Abubakar as presidential candidate.

Atiku is from Adamawa State, in northern Nigeria and was Obasanjo’s deputy between 1999 and 2007.

Obasanjo felt the decision is not politically correct and in the spirit of the understanding between the North and the South of Nigeria.

“I am very much aware that it’s the turn of the South to produce the next President of Nigeria. I was part of the meeting when the agreement was made between Northern and Southern Leaders”, Obasanjo was widely quoted to have said today.

“I am even surprised PDP gave her ticket to another North candidate.

“It will be an injustice to the South if the North retains Power after 8 years of rule”, he added.

Obasanjo spoke today during the visit of Asiwaju Bola Ahmed Tinubu to his Hilltop home in Abeokuta.

“We will do the right thing when the time comes,” the former leader said during the closed-door meeting.

In 2018, he famously said: “If I support Atiku for anything, God will not forgive me. If I do not know, yes. But once I know, Atiku can never enjoy my support,” he added.

No plot to remove Abdullahi Adamu as national chairman – APC

How 5G Will Usher in a New World for Nigerians – CEO, MTN Group