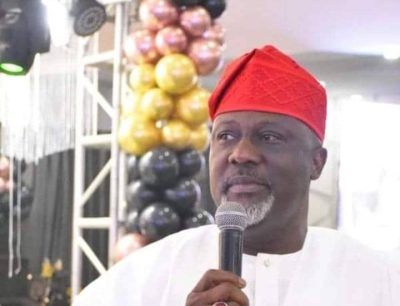 Dino Melaye, spokesperson of the Atiku Abubakar presidential campaign organisation, says Peter Obi, the presidential flagbearer of Labour Party (LP), does not have the capacity to keep Nigeria united.

Melaye spoke on Friday during an interview on Channels Television.

Reacting to a question on the new wave of political consciousness among Nigerians, especially on social media, the former senator said the social media popularity of Obi is “euphoria”.

Melaye added that the LP presidential candidate is a fantastic person, but 2023 is not his time to become Nigeria’s president.

“To start with it, there is no wave. What you have is an euphoria — a created euphoria. Peter Obi is a fantastic Nigerian. I have tremendous respect for him and I have said it before that he is a fantastic person,” Melaye said.

“But this is not his time. He does not have what it takes now to unify this country. Even before you start talking about the economy, you need peace and you need to build trust among Nigerians.

Melaye also compared Obi’s popularity to that of late Gani Fawehinmi, human rights lawyer, who contested and lost the 2003 presidential election, adding that the PDP is not bothered about the LP presidential candidate’s growing popularity.

“Go to Instagram and Twitter handles of Peter Obi. How many people are following him? We have seen this thing before? Gani Fawehinmi once ran for the president of this country. Facebook went agog. At the end of the day, he got 1,400 votes. Femi Falana, my uncle, ran for the governorship. He is popular. There was a lot of euphoria like this. In Ekiti, what was his score?

“Peter Obi was in Osun to personally campaign for his governorship candidate in a rally — the performance of Labour Party — 2,700 votes where PDP scored over 400,000.

“So, don’t be carried away with this. It is an euphoria. As we are going now, the thing is winding down. We are not interested. We are focused.”