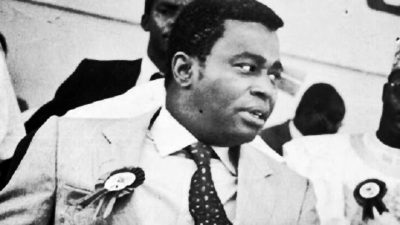 Jun 26, 2022
When the news of Sonny Chu Okongwu’s death filtered in on Wednesday, Nigeria was still mourning Ernest Shonekan, former interim head of state, who had died hours before.But death heeds no one and waits no turn. Okongwu, aged 87, was said to have died in Enugu surrounded by loved ones.

Okongwu was a multidisciplinary man of letters who served the country twice as a minister under the military regime of Ibrahim Babangida. He was a Harvard-trained economist who fiercely defended the administration’s Structural Adjustment Programme (SAP).

FROM ABA TO HARVARD

Okongwu was born on September 23, 1934, in Anambra state to a father who was a celebrated primary school headmaster, and whose reputation as a disciplinarian, according to Chinua Achebe, his former student, “sent chills down the spine of all pupils throughout the Eastern region”.

The young Okongwu attended St. Michael’s School, Aba, between 1941 and 1946 before he proceeded to Government College, Umuahia, where he was handed over to Achebe by his father.

“He was standing, leaning on the railing with his right hand holding onto the bars. He spotted me from a distance and called me over, introduced me to his son, and asked me to ‘take care of Sonny at Government College’,” Achebe wrote in ‘There was A Country’.

Okongwu studied economic theory at Boston University, before furthering his education at Harvard University from 1961 to 1965.

With his rich academic background and camaraderie with some of the best writers Nigeria has produced, it was no surprise that Okongwu segued into journalism. He was host of ‘Jaz Club’, before diving into print journalism. He was employed as a sub-editor at The Daily Times without reportorial experience.

“Then, in the Daily Times, where I started as a sub-editor, there was an experiment that P. Robertson, general manager, and Cecil King wanted to try; to take people without reportorial experience to sub desk and groom them from there,” he had narrated in a chat with Vanguard in 2013.

“We had a wonderful time, playing with dictionaries and education on modern English usage, learning all the essays and stuffs like that and so on.”

He then joined The West African Pilot as the features editor.

Okongwu went abroad and furthered his knowledge of economics. Upon returning to Nigeria, he was appointed minister of national planning in 1985 by the military government under Ibrahim Babangida. He held the position for a year before becoming the minister of finance of the same administration for four years.

He was one of the administration’s SAP vocal defenders. He debated in support of the policy, which was largely unpopular among Nigerians alongside fellow cabinet members like Olu Falae and Kalu Idika Kalu.

THE EFFECT OF SAP ON NIGERIA’S ECONOMY

The SAP’s main goal was to keep the Nigerian economy, which was – and still is – overly reliant on crude oil, afloat as oil prices began dropping below $10 per barrel. The policy was launched in partnership with the International Monetary Fund (IMF) and the World Bank (WB).

Although SAP worked for the first couple of years of its implementation, it began eroding its gains in subsequent years.

According to a publication titled ‘Elites and Economic Policies in Indonesia and Nigeria’ by A.H. Fuady, for Okongwu, Falae and Kalu, “even though they all agreed on the adoption of the structural adjustment program, they disagreed publicly on how to implement it”.

The policy, which was meant to stabilise the struggling economy, has been criticised by many to be the genesis of Nigeria’s economic problem.

‘I STILL CONSIDER MYSELF A JOURNALIST’

Speaking further in the interview with Vanguard on clocking 79, Okongwu said he remains a journalist despite his old age as his experience in that regard has been “wonderful”.

“Well, my health is as good as it can be at my age. I still manage to do three miles of walk every day; that is four days a week and, from head to toe. There are usual old age problems, but I think I am happy to be around,” he said.

“I have no plans of wasting my time on chonyi, chonyi, chonyi… every minute of my God’s given time on earth. I have been usefully engaged in something productive.”

On his time in particular while working as the sub-editor, he said “my experience as a stone sub, learning the stone work and final production processes has remained incredibly useful till today. So, I consider myself still a journalist, with due respect”.