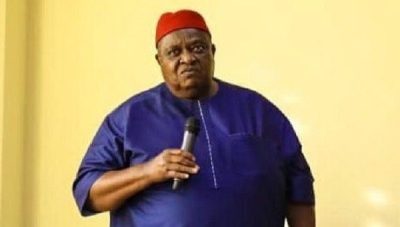 Ohanaeze Ndigbo Worldwide, the apex socio-cultural organisation of the Igbo people, has lamented and condemned killings in the South East states.

Iwuanyanwu, an elder statesman, frowned at the “wanton destruction of lives and property” in the South-East geo-political zone, adding that the attacks have made many Igbo people homeless in their ancestral land.

He condoled with affected families and communities and described the situation as a declaration of hostility against the Igbo people.

“The Ohanaeze Council of Elders views this situation as a declaration of hostility against the Igbos. Make no mistake about it, any attack on an Igbo man anywhere is an attack on all Igbos,” he said.

He, however, called on South-East governors and the President-General of Ohanaeze Ndigbo Worldwide, Amb. George Obiozor, to immediately convene a meeting of South-East leaders to proffer solutions to the situation.

He added that Ohanaeze would set up a relief committee to support all Igbos who have recently suffered from armed invasion and flooding.

He appealed to business leaders of Igbo extraction as well as the National Emergency Management Agency (NEMA) and others to rally round victims of invasion and flooding to alleviate their sufferings.

“The burden of catering for the welfare of the affected Igbos requires the contribution and assistance of Igbo men and women in business.

“We also appeal to the Federal Government to take steps to stop this unwarranted violation of the rights of our people,” he said.

I don’t have to ask for forgiveness from Mexicans – Messi