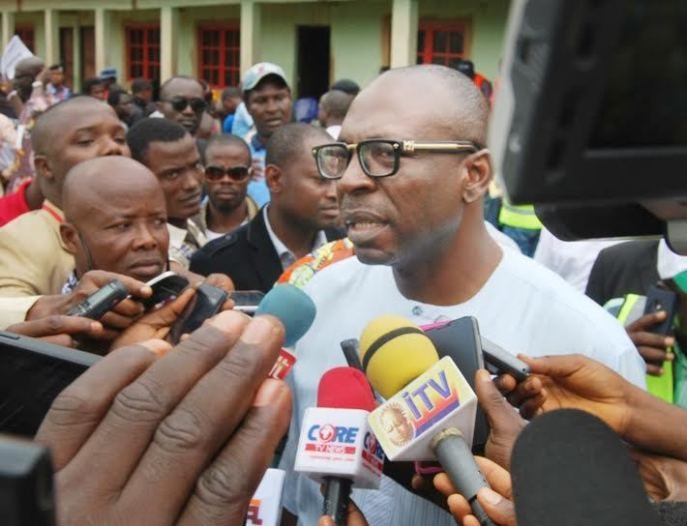 Osagie Ize-Iyamu, candidate of the All Progressives Congress (APC) in the Edo governorship election, says Adams Oshiomole, former governor of the state, never meant the bad things he said about him.

He said the APC leader was only trying to “demarket” him when he contested for governor under a different party — the Peoples Democratic Party (PDP).

In 2016 when he was campaigning for Godwin Obaseki, the APC candidate who has now defected to the PDP, Oshiomhole denounced Ize-Iyamu as someone who cannot be trusted with public funds.

He said the then PDP candidate was hiding from the anti-graft agencies, adding: “Lucky Igbinedion’s mother was reported to have slapped Ize-Iyamu for misleading her son. He tried it with me, but we kept him away. Nothing near government circle. No access to public funds.”

In an interview with The PUNCH, Ize-Iyamu said Oshiomhole was “playing politics” and the things he said about him was never from his heart.

“He made those statements during the period I was on the other side and was contesting to be the state governor and he (Oshiomhole) was determined to prevent that. What do you expect? Were you expecting him to praise me at that time when he did not want me to be governor,” he said.

“So, when you look at the context in which he said those things, you will understand that he was just playing politics and he needed to demarket me so that his candidate would have an advantage. And after the election, that was the end of it.

“So, I do not think that we should dwell too much on what he said before the election. If you are saying that, we can also take you back to what he said about me before then. People are saying look at the bad things he said during the campaign.

“Why did they not look at the good things he said before the campaign? The truth is that he was only trying to demarket me so that Edo people would not vote for me, not that it was from his heart.”

Below is the video of Oshiomhole speaking ill of Ize-Iyamu when he contested in the 2016 election:

Tinubu Will Be Worse Than Buhari, Runs Lagos Like Pig Farm – Deji Adeyanju

2023: Tinubu, Yahaya Bello should be PDP’s headache not…