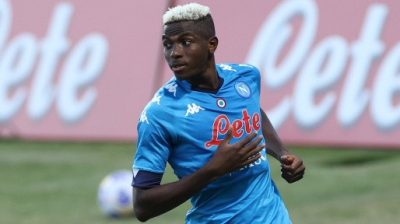 Victor Osimhen suffered a horrific facial injury during Napoli’s 3-2 defeat to Inter and his surgeon revealed just how complex the Nigerian’s issue was.

Gianpaolo Tartaro made clear that it was no ordinary head injury, with the player having fractured a cheekbone and eye socket as a result of the clash with Inter defender Milan Skriniar.

“He had a series of fractures, it was as if his head had ended up under a press. [Surgery] took three hours, we had to cut him in three places on his face,” Tartaro said in an interview with Il Corriere dello Sport.

“We have to now look at a special mask for his case. It is not something banal, there is a nerve there, it is all very difficult. We will see how his situation evolves.”

The doctor also confirmed that Osimhen would be unable to attend the African Cup of Nations in January, as he could have to undergo surgery once again.

He said: “The eye came out of its socket. It is not simple at all, in fact it is very delicate due to the crushing of the socket, due to the curving of the malar bone [which is] practically destroyed.

“The various fractures, not only the cheekbone, obviously brought complications and six plates and 18 screws had to be inserted.

“Victor has to be very careful because if there is a problem he must return to the operating room.”