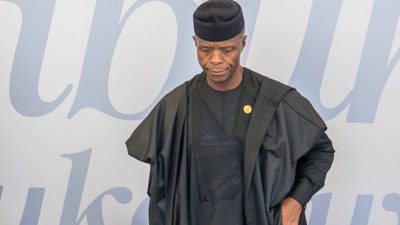 My first encounter with Professor Yemi Osinbajo was in 1999 when he became the Attorney-General and Commissioner for Justice in Lagos State. He had been appointed by the then elected Governor of Lagos State, Asiwaju Bola Tinubu. Then, I was a reporter covering the activities of the Lagos State Government for my Newspaper. Quiet and unassuming, Osinbajo goes about his job without much noise. Though we weren’t that close as my friends in the cabinet then were Rauf Aregbesola, Commissioner for Works; Musiliu Obanikoro, Home Affairs; and Muiz Banire, Special Adviser to Tinubu and later Commissioner for Transportation, it was a delight watching him from afar.

Anytime he had to brief the media, Osinbajo did so without attracting much attention to his person. The job came first.

Fast-forward to 2019 when I accompanied my former boss, Professor Isaac Adewole, former Minister of Health, to Aso Rock Villa for a meeting with Vice President Osinbajo. Upon sighting me, he could still recognise my face but not my name again. I told him that we were both at Alausa and he greeted me warmly before we took our seats.

Now, Osinbajo is about to face the greatest test of his political career. He is interested in becoming the President of Nigeria next year – a position also coveted by his former boss and benefactor, Asiwaju Tinubu. Many Nigerians are waiting and watching to see whether Osinbajo will contest the Presidential ticket of the All Progressive Congress (APC) with his former boss, Tinubu.

Already, there is a fierce debate on social media on the propriety of an Osinbajo challenging his boss for the APC ticket. The debate became heated when the Special Adviser to the Vice President on Political Matters, Senator Babafemi Ojudu announced to the whole world that he was being threatened for pitching his political tent with Osinbajo instead of Asiwaju, who had been his backbone in the political arena. A mutual friend of both Tinubu and Osinbajo, Richard Akinnola, also came out publicly to declare support for the Star Boy.

What many do not know, however, is that the plan for Osinbajo to take over from President Muhammadu Buhari has been in the works for a very long time. Various committees and contact groups have been set up long before now to work on the project. It was when those committees gave a favourable report that the VP tacitly informed President Buhari and his father in the Lord, Pastor Enoch Adeboye, of his desire to contest the 2023 presidential election. Neither of the duo discouraged him but only assured him of their support when the time is ripe.

Indeed, many political watchers interpreted the body language of President Buhari when he said in a recent interview that he has someone in mind who could take over from him but won’t mention the person’s name as he could be killed to mean the Vice President, who many believed does not have a strong political base. That appears to be in the past, for, in the last few months, Osinbajo has built a formidable political structure across the country with many of them openly campaigning for him.

In August last year, one of such groups, Osinbajo Grassroots Organisation, declared that Osinbajo was the future of Nigeria. The National Convener of OGO, Foluso Ojo, in a statement, said on several instances that Osinbajo has displayed competence and ability to govern Nigeria. “We have identified in the Vice president, a leader of unimpeachable character; someone who can continue on the good works already started by President Muhammadu Buhari. We do not need anyone to tell us that Prof Osinbajo is a pathway to Nigeria’s future from 2023,” the group said. The group is not the only one telling Nigerians that Osinbajo is the answer to the country’s problems.

A group of stakeholders in the All Progressives Congress (APC) known as Progressives Consolidation Group (PCG), led by Ahmed Mohammed and Eberechukwu Eli Dibia, in a letter dated July 14, 2021, titled, ‘APC and the future of Nigeria: Why we must get it right and consider the Osinbajo option in 2023,’ made a case for the Vice President to succeed Buhari.

The group said it had reached out to the Senate President, the Speaker of the House of Representatives, APC state governors, the party’s principal officers in the Senate and the House of Representatives, members of the APC National Caretaker Committee, former and serving federal legislators, and leaders of the party’s women and youths groups. “We, members of the Progressives Consolidation Group, hereby solemnly join our voices with that of many others in appealing that you throw your weight behind our call for consideration of an Osinbajo successor administration after that of President Muhammadu Buhari would have run a full course in 2023,” the PCG said in the letter addressed to the Senate President. The group expressed the belief that giving Osinbajo the APC ticket “would certainly be the best assurance of stability and progress for extant developmental objectives.”

The Nasarawa State Governor also appeared to have bought into the PCG’s moves when, at a meeting with the group at Government House, Lafia, on September 20, described Osinbajo as the most qualified candidate to succeed Buhari. “Osinbajo is the most qualified candidate and only sellable product that can succeed President Muhammadu Buhari in the forthcoming 2023 presidential election across the country,” the Nasarawa State Governor said. Election campaign posters bearing the pictures of Osinbajo for president, and Borno State Governor Babagana Zulum as his Vice president have been on display in several parts of the FCT.

Expectedly, many in the camp of Tinubu are aware of the tacit endorsement from President Buhari for his Vice to succeed but that seems not to bother them. They are, however, insisting that the President provide a level-playing ground for all the aspirants and not an open endorsement of Osinbajo.

Indeed, Tinubu knew from day one that it would be difficult for whoever emerges as Vice Presidential Candidate of the APC in 2015 not to attempt to take over from Buhari in 2023.

He did all within his power to emerge as Vice President to Buhari in 2015 until it became practically impossible for the party to fly a Muslim-Muslim ticket. When it became apparent that a Muslim/Muslim ticket wouldn’t fly, a committee was set up by Buhari to come up with three names of southwest politicians that could fly the APC flag with him as running mates. The committee which has the likes of Bukola Saraki, Abdul Azziz Yari, Aminu Tambuawal and Aliyu Wamakko as members came up with the names of Yemi Osinbajo, Olurunimbe Mamora, and Olagunsoye Oyinlola as possible contenders for the VP slot. Tinubu was given the honour of picking one from the list but he rejected the three names and suggested Adams Oshiomhole. It was when those with Tinubu (Bisi Akande and Rauf Aregbesola) turned down Oshiomhole that Tinubu eventually settled for Osinbajo.

Now, many political analysts are of the view that Osinbajo should not contest the presidential ticket alongside his benefactor. From all indications, however, Osinbajo will most likely seek to succeed his boss thereby failing the loyalty test. The die is cast, as they say, between Tinubu and Osinbajo. The fear of many political watchers is that if Tinubu did not get the APC ticket, there could be an implosion in the party. That has been the headache of APC Caretaker Committee Chairman, Mai Mala Buni, who has done all within his power to manage all the political tendencies within the party. How successful the task is will manifest during the February 26, National Convention of the ruling APC.

For now, the best option is to prevail on either of the two to step down for the other as it would be disastrous for the duo to slug it out on the field for the party ticket. Even as APC presidential candidate, provided the party does not disintegrate, VP Osinbajo will struggle against a formidable candidate that the opposition PDP will likely field in the 2023 polls except the Kingmaker (Tinubu) eventually agrees to support his protégé again and Buhari markets Osinbajo in the north aggressively while a popular Vice President of Northern extraction is choosing to run with Osinbajo. Indeed, the coming days will be interesting.