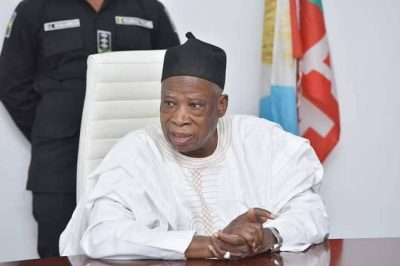 The Peoples Democratic Party (PDP) has criticised Abdullahi Adamu, the All Progressives Congress (APC) chairman, over his comments on the Osun governorship election.

The Independent National Electoral Commission (INEC) has scheduled July 16 for the governorship election in the state.

Gboyega Oyetola, the incumbent governor, is the APC candidate while Ademola Adeleke is the PDP flag bearer.

During the inauguration of the APC’s 86-member campaign council for the election, Adamu had asked them to “go down the trenches” and win the election through every legal means.

“Nobody should come back to us crying, failure is not our own by the grace of God. Whatever it takes within the laws of the land, I said go for it, win the election,” Adamu had said.

Reacting in a statement signed by Debo Ologunagaba, the PDP described the comment as reckless and an “irresponsible show of aversion to a peaceful electoral process”.

“It is pertinent to remind Abdullahi Adamu that election is not warfare! Directing his party members to “go down to the trenches” in the Osun State Governorship election and brazenly asserting zero tolerance for election defeat cannot find accommodation within the ambits of the law,” the statement reads.

“Abdullahi Adamu’s comment further confirms that the APC is in mortal fear of Senator Adeleke’s soaring popularity, realizing that Governor Oyetola is no match for Senator Adeleke; a blunt reality for which the PC national chairman has now become frenetic.”

The opposition party said the Osun election is a “referendum on the monumental failure” of the APC in the state.

The party said the people of the state are ready “to liberate themselves from the stranglehold of the incompetent, vicious and inhumane APC administration”.

“Governor Oyetola in the last four years displayed unparalleled incompetence in governance and ran the most ineffective and clueless administration in the history of Osun state,” the party said.

“This is why the people of Osun state are determined to kick out Governor Oyetola and elect Senator Ademola Adeleke who, in any event, defeated Governor Oyetola fair and square in September 2018 governorship election.

“The PDP, therefore, cautions Abdullahi Adamu to retreat and rein in his thugs, political terrorists and the band of riggers as they will be stiffly resisted by the people.”