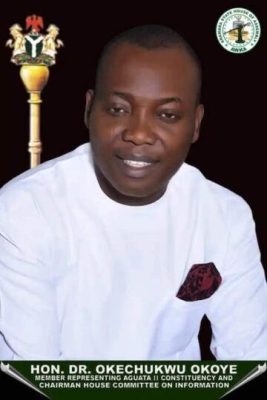 Nigerians have expressed outrage over the beheading of the lawmaker representing Aguata North, in the Anambra State House of Assembly, Okechukwu Okoye by his abductors.

Okoye, who was abducted by gunmen few days ago was beheaded, with his head hung at a motor park.

A shocked Anambra State Governor, Prof. Charles Soludo has offered a N10 million reward for information to track the killers of the abducted lawmaker.

Nigerians on social media have described the beheading of the lawmaker as callous and uncalled for.

According to Sidney Amaka, “Kidnapped lawmaker representing Governor Soludo’s constituency has reportedly been beheaded by unknown gunmen and his head mounted at Chisco Park Amichi. The generation of people that did this to this man Will never have peace, Their generation are cursed forever.”

Uchechi Moses wrote: “With the butchering of a lawmaker in Amichi, Anambra by UGM, the South East in my opinion is officially a terro-laden hell-hole. Igbo elites should rise and stop this disgusting nonsense. No region has had a lawmaker decapitated by terrorists. Also, Igbos on social media.”

Ifeyinwa Tiger said “The recent video where that man was beheaded in my hometown, Amichi. I feel so discreted! What an abominable act. I’m shouting and screaming my lungs out! The disaporans are actually the cause of these mayhem. I’m sick and tired!”

Mr. Macaroni added: “A most disturbing and inhumane act! The head of a serving Anambra lawmaker; Honourable Okechukwu Okoye was displayed at a Motor Park in Amichi community of Anambra State.. What is happening in Nigeria for goodness sake?”

Molade Gbolahan said “I believe the SouthEeast can now agree that IPOB is a terrorist organization because if we call them terrorist, some people will be speaking English. Hon Okechukwu Okoye was kidnapped, killed & be headed & his head mounted at Chisco Park in Amichi community. Do not Pamper monster.”

Ada Bekee said: “They beheaded a serving member of HOA. He was representing Soludo’s constituency. His beheaded head was mounted for all to see in Amichi town. See ehnn, the horror Nnamdi Kalu unleashed in Anambra will not be forgotten. He left Abia state to camp in Anambra.”