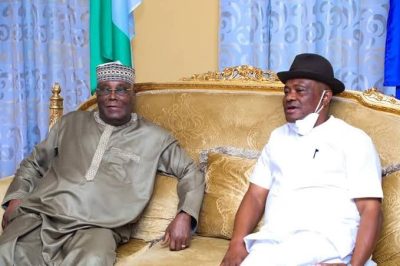 With the loss of the presidential ticket, Governor Nyesom Wike of Rivers State has suddenly become an important figure to the Peoples Democratic Party (PDP) and its presidential flagbearer, Atiku Abubakar.

It was Atiku who won the presidential ticket of the party.

With his loss of the presidential primaries election to Atiku, Wike thought that shifting to gear two would give him some satisfaction within the party. He hoped to become the vice-presidential flagbearer.

Names of Governors Wike, Ifeanyi Okowa of Delta and Governor Udom Emmanuel of Akwa-Ibom were considered by the screening panel set up by the PDP to nominate a vice-presidential candidate.Not a few thought that Wike, given his popularity, would be Atiku’s running mate. But Wike’s ambition was dashed the second time. Okowa was the chosen one.

Now, the fear is palpable within PDP that other parties might marry Wike on the rebound! This is an expression used in marital situations whereby when a husband and wife quarrel, a man who had been eyeing the woman with the disposition of a notorious he-goat, could move in and marry her. That is the way the PDP sees Wike and the rumour that he is trying to port to the All Progressives Congress (APC).

For this reason, Atiku has set up a committee to pacify Wike and other disaffected members of the party. This is for the party to go into the 2023 election as one. This is where the parable of the snake kingdom comes in.

Africans have this time-worn adage that it is because a snake crawls solo that makes it fall prey to the hunter’s machete. Which farmer can face a marauding band of these reptiles, made up of vipers, mamba, rattlesnakes, boomslang, banded krait, coastal taipan?It is worse when they are led by the majestic python or boa constrictor. It will be a double tragedy if the Amazon’s anaconda follows from the rear!

For the PDP, the main battle is 2023. Atiku and others believe that members – the victor and the vanquished – must begin to reconcile to form a common front.

The case of Wike is particularly important to PDP. First, he has a massive war chest which Atiku and the party will benefit from to work on the electorate. That he came second shows that in terms of importance within the party, Wike is not a pushover. He and his political machinery are needed for the war ahead.

Another important factor is that Wike, a man with a barking reception who speaks gutturally like a village masquerader, can scuttle things if he is not pacified.

Not a man who fears talking to anyone, Atiku and the PDP are doing everything possible to woo him into the fold. This is because the fear of Wike is the beginning of wisdom for the party.