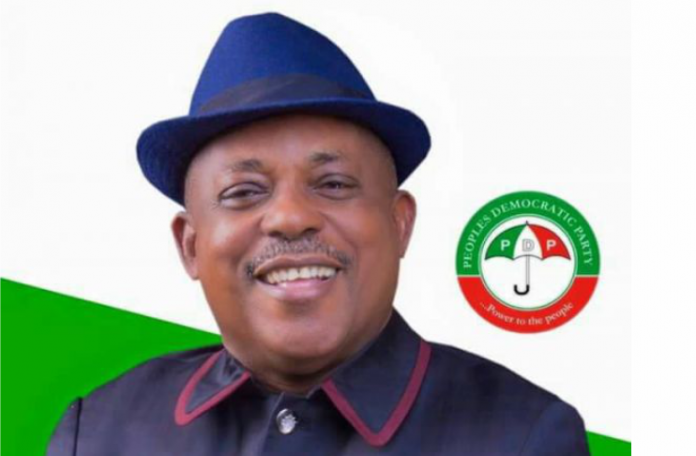 The suspended National Chairman of the Peoples Democratic Party (PDP), Prince Uche Secondus, has gone underground ahead of this weekend’s crucial national convention of the party.

The objective is to stave off pressure from stakeholders of the opposition party to withdraw his court appeal seeking the suspension of the convention scheduled to hold in Abuja on October 30 and 31.

Investigation by The Nation in Abuja yesterday revealed that Secondus had also chosen to remain incommunicado from PDP governors, members of the Board of Trustees, some presidential aspirants and elders of the party.

Sources said last night that Secondus’ action was causing panic in the party.

Some concerned PDP leaders including state governors were said to be keen on meeting with him to resolve his grievances, while some other governors elected on the platform of the party and members of the National Convention Committee were yesterday consulting lawyers and weighing options.

One of the options was whether to take the risk of conducting the convention.

It was also learnt that some party leaders were considering alternatives in the event of a restraining order from the court.

The affected leaders have started considering December for the National Convention, which will be conducted by a new committee.

It was learnt that the two parties in court were wary of a likely fundamental pronouncement by court on the PDP crisis this week.

According to findings, the party leaders are uncomfortable with the pending appeal of Secondus in the Port Harcourt Division of the Court of Appeal.

The appeal arose from the decision of a High Court in Rivers State on September 10, which restrained Secondus from parading himself as the national chairman of PDP.

It was gathered that Secondus has stuck to his guns to seek redress in court.

He also strengthened his legal team by bringing more lawyers on board and dropping some.

A top source said: “The suspended National Chairman, Secondus, sees this as an epic battle. He has been on his own, he wants to fight to the end.

“Secondus has gone underground, no one can reach him. At his convenience, he knows how to link up with any party leader.

“Before becoming incommunicado, he had told party leaders that he would fight his battle to the Supreme Court.

“Some elders and leaders of PDP have failed to persuade him to accept his fate. He said he wants to see justice served so that PDP can learn a big lesson.”

A reliable member of the PDP National Convention Planning Committee, who spoke with our correspondent, said: “Only a court can stop our convention. We know that the legal battle will resume this week and there might be some pronouncements.

“Our governors and members of the National Convention Committee have been consulting lawyers and weighing options.

“Since there was a recent judgment that a court does not dabble in the internal affairs of a political party, we are thinking of whether or not to take the risk to go ahead with the convention.

“Some of our party leaders have been considering alternatives if there is any restraining order from a court.

“One of the alternatives is to hold our convention in late December when the tenure of Secondus-led National Working Committee would have ended and the suspended chairman will no longer have a valid case.

“If we shift the convention to December, it will confirm the advisory of Sen. David Mark Committee that Secondus’NWC be allowed to complete his term in office.”

The eight-man reconciliation committee of the party had warned against tampering with Secondus’ NWC.

“That the party appoints a Convention Committee that should take over the responsibilities of organising the National Convention as soon as possible.

“That the handing over after the convention could be delayed until December 9, 2021 to enable the current NWC serve out their term.

“That the Governors’ Forum should point the way forward. That there is need for the governors to continue to be united.”

Govs, elders intensify efforts to meet suspended chair
Another well-placed source told The Nation yesterday that some governors of the party had renewed efforts to get Secondus to soft pedal on his move against the planned convention.

“The move is being discussed with utmost concern by our leaders. I can confirm to you that a couple of governors have raised concerns during the week on the matter,” said the source.

A former top official of the party claimed “Secondus has told those that reached out to him after the development that he is open to discussion.

“And I can tell you that some governors including Seyi Makinde and Ifeanyi Okowa, are now seeking ways of resolving the matter.

“Aside from the governors, I want you to know that almost every stake holder, including those against Secondus, feels there is need to resolve his grievances and ensure he is out of court before the convention holds.

“This is because there are fresh concerns that these court cases can affect the convention and/or its outcomes negatively. Or what do you think will happen if the court  grants his request for the convention to be declared a nullity, even after we might have elected new executives?”

The Nation also gathered that following the failure of several reconciliation committees to resolve the differences  between Secondus and Governor Nyesom Wike of Rivers State, there is a fresh plan for the National Executive Committee (NEC) of the PDP to wade into the matter and ensure that the duo withdraw the cases they or their allies, have instituted in court, in the interest of the party.

Party sources claimed this forms part of the recommendation of the Senator David Mark-led Reconciliation Committee which failed in its task to end the rift between the duo.

Similarly, it was gathered that following news about Secondus’ latest legal move, the leadership of the party’s 270-man 2021 National Convention Organising Committee (NCOC), may have resolved to confer with the suspended chairman with a view to finding out how his grievances can be met.

A source, who is a member of the committee from the North-central told The Nation that the threat posed to the planned convention by the legal instituted by Secondus came up during a meeting of the committee and it was resolved that there is need for the leadership of the committee to meet the people concerned.

“Aside Secondus, discussions will be held with Governor Wike and some chieftains of the party in Osun, Adamawa, Lagos, Taraba, Edo and Ogun states on the need to ensure that the convention and its outcomes are no longer threatened by litigations. We hope to make a success of this fresh attempt,” he said.

Secondus’ lawyer, Tayo Oyetibo (SAN) had, in an October 21,2021 letter to the PDP,  drawn attention to an Application on Notice  filed by the politicians seeking an order  of injunction restraining the PEOPLES DEMOCRATIC PARTY whether by itself, its officers, servants, agents and or representatives from holding or conducting its National Convention scheduled for 30th and 31st October 2021 or any other date, pending the hearing and final determination of  his appeal; and alternatively an order  that the parties to the  appeal  shall maintain the status quo ante as at 22 August 2021, when Appellant/Applicant was occupying the office of National Chairman of Peoples Democratic Party, pending the hearing and final determination of this appeal.

Why We Shut Down Synagogue Church – T.B Joshua’s Widow Evelyn