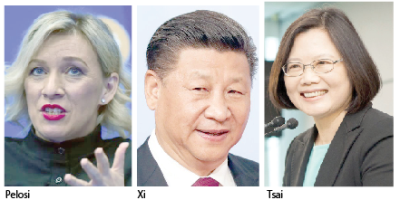 In his statement on the recent visit of the Speaker of the House of Representatives of the United States of America, Nancy Pelosi, to Taiwan, the Minister of Foreign Affairs of the Republic of China who is also a State Councillor, Wang Yi, described some American politicians as “troublemakers” who are out to disrupt the peace currently prevailing across the Taiwan Strait. The visit was, according to him, an act of “political provocation” that has already generated huge concern within and beyond China.

Pelosi’s visit to Taiwan on 2nd August 2022 was an act over which the Chinese authorities as well as political institutions and organizations have understandably cried out. The Ministry of Foreign Affairs of China, Standing Committee of the National People’s Congress (NPC), Foreign Affairs Committee of the Chinese Peoples Political Consultative Conference (CPPCC) and the Taiwan Work Office of the Communist Party of China (CPC) have all simultaneously, uniformly and angrily reacted to the visit.

All of those authorities and institutions have tried to establish the offensive nature of the visit which they described as the violation of the ‘One-China Principle’ and therefore an infringement on the sovereignty of the country. The visit, as further explained by the Chinese authorities, was a threat to the  China-US Relations which predicate on the recognition of the fact that Taiwan remains part of China over which the Chinese government, therefore, exercises full control.

The position of the Standing Committee of the National Peoples Congress that the “Taiwan Question bears on China’s sovereignty and territorial integrity” about which “there is zero room for compromise and not an inch to give” perfectly rhymes with the stance of the Taiwan Work Office of the Communist Party of China that there is “only one China in the world and Taiwan is part of China.” These are statements that have derived adequate strength from the reaction of the country’s Ministry of Foreign Affairs in which it was maintained that “Taiwan is an inalienable part of China’s territory and the Government of the Peoples Republic of China is the sole legal government representing the whole of China and the argument of the National Committee of the Chinese Peoples Political Consultative Conference that the “Taiwan Question is China’s internal affair.”

It is clear that in the positions of all the Chinese authorities are a condemnation of the visit, re-affirmation of control over Taiwan and a vow to strongly resist any attempt by the United States to interfere in the internal affairs of China. They are positions that are clearly indicative of the absolute vehemence with which the country is opposed to the attitudes of the United States towards Taiwan.

On her part, Pelosi, while already in Taiwan, explained that the visit was a “statement that America stands with Democratic Taiwan in the face of the Chinese Communist Party’s (CCP) aggression.” She, additionally, said that the Taiwan Relations Act allows for the establishment of a “framework for an economic and diplomatic relationship that would quickly flourish into a key partnership” between the two countries.

Having come from Speaker Pelosi, these statements are a clear expression of the determination of the American government to continuously meddle in the affairs of a province that is part of China. In its usual style, the United States has made the issue of the protection of democracy as the main reason for the Pelosi’s visit and all its other actions towards Taiwan.

However, while Pelosi was busy making case for her actions and, by extension, the clear tendency of her country for undue interference in the domestic affairs of Taiwan, the defense forces of China have beefed up their operations in a bid to scuttle the America’s attempt to exert control over the territory. Revelations by the Spokesperson of the Eastern Theater Command of the People’s Liberation Army (PLA), Shi Yi, have shown that China began military operations near Taiwan which were meant to serve as a “fair deterrent to the recent major escalation of United States negative actions on Taiwan and a serious warning to the Taiwan Independence forces.”

Squabbles over Taiwan are not new realities as the contending forces have consistently been making claims and counter-claims. There are abundant historical facts to show the extent of the disagreement over Taiwan with each one of them providing a basis of one claim or another.

A certain part of Taiwanese history shows that the territory was, in 1683, annexed by the Qing dynasty of China but later ceded to Japan in 1895. It was in 1945, after the Second World War, that it was again taken over by China after which much later in 1949, as a result of the victory of the Communist Party of China led by Mao Zedong over the Nationalist Government Forces under Chiang Kai-shek, that losers of the war migrated to Taiwan.

Even with this history, the separatist forces of Taiwan have continued to insist that the territory has never been part of the Modern China that was founded in 1911 or Communist China that came into being in 1949. They, therefore, on the basis of this argument, continuously insist that Taiwan is a country that is completely Independent of China; a position that is somehow being supported, as the recent Pelosi’s visit has amply shown, by the United States.

But the arguments of China have appeared to be weightier as they are based on some commitments made by the United States with regard to the position of Taiwan. All the Chinese authorities in all their reactions to the visit of the American House of Representatives Speaker to Taiwan made reference to the three communiques jointly issued by China and United States in which the status of Taiwan as part of the Republic of China was duly recognized.

Specifically, the Chinese Ministry of Foreign Affairs referred to one of such communiques that was issued in 1979 in which it was clearly stated that the “United States of America recognizes the Government of the People’s Republic of China as the sole legal government of China” and would, therefore, within this particular context “maintain cultural, commercial and other unofficial relations with the people of Taiwan.” The ministry further recalled that the United Nations General Assembly 2758 of 1971 similarly recognized the One-China Principle on the basis of which 181 countries have so far established diplomatic relations with the country.

It is all these undeniable facts that have provided the solid ground for China and some concerned sections of the International Community to describe the visit of Speaker Pelosi to Taiwan which was the first by any senior American government official in the last 25 years as a deliberate attempt to undermine the US-America Relations and, therefore, an act of provocation. They are really facts that have exposed American government as far more provocateur than defender or promoter of democracy. (Leadership NG)

UTME screening: Varsities, others to make N3.3bn from candidates