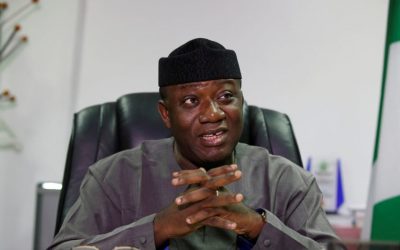 PENSIONERS in Ekiti State will want outgoing Governor Kayode Fayemi to do one thing before he hands over to the incoming administration in the next two months.

They will want him to clear the over N40 billion pending gratuities and other benefits.

Cumulatively, the retirees at present, are owed not less than  N37billion gratuity arrears  apart from monthly pensions.

The pensioners who spoke with Vanguard pleaded with the Governor to use the few months left for him to leave office to clear a reasonable amount from the outstanding debt to ameliorate their suffering.

Though they appreciated the government of Dr. Fayemi for increasing the amount budgeted for the payment of their benefits from N100 million to N400 million, they insisted that more needed to be done as promised during the electioneering campaign.

At a  prayer session to seek the face of God over their plight, the chairman of the Nigeria Union of Pensioners, NUP, Mr. Joel Akinola, lamented the death of 200 members within a year due to inability to meet their basic needs.

According to him: “We are crying and justifiably so in view of our agonies, our sufferings and an unprecedented assault on the psyches of our members in Ekiti State. Our pride as senior citizens who have faithfully, laboriously and dutifully served this nation is being rubbished daily. Pensioners are being portrayed as failures in their communities, and worst of all, they are being pushed to their graves in large numbers.

“Many have been abandoned by children and families who had exhausted their financial resources on them. These abandoned pensioners are being owed millions of naira by way of unpaid arrears of pensions and gratuities.

“Part of the first stanza of our national anthem says: “The labour of our heroes past, shall never be in vain.” Pensioners’ labour is now being made to be in vain by the failure of government and the citizenry to comprehend the seriousness of their plight.

“The following statistics is a summary of the state’s indebtedness as at December 2021: Pension Arrears; three months for state and seven months for local government. Gratuities: State pensioners were last paid in July 2013 with liabilities of about N18 billion, while local government pensioners have a liability of N19.8 billion and were last paid in September 2012. One has to imagine what the indebtedness will be now in July 2022.”

Speaking, Chief Press Secretary to the governor,  Mr. Yinka Oyebode, said the government places premium on the welfare of not only workers but also pensioners.

He said since inception, the government had not owed a single month of pension while the payment of gratuity was increased from N100 million to N400 million. According to Oyebode, government would have loved to clear all the backlog of the gratuities owed by previous government but due to economic realities. That must also be considered.