Pochettino Reacts To Messi’s Handshake Snub After Substition Against Lyon 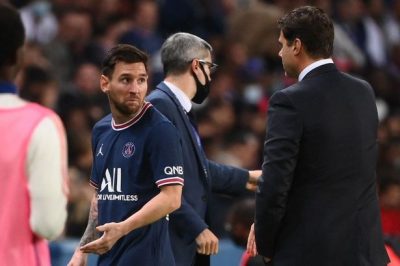 PSG kept up their 100 percent Ligue 1 record this season with a comeback victory at the Parc des Princes.

Lucas Paqueta gave Lyon the lead early in the second period, before Neymar levelled the scores from the penalty spot.

However, with 15 minutes remaining in the game, Pochettino took off Messi who did little to hide his frustration, refusing to shake hands with the ex-Spurs boss as he trudged to the bench.

There, Messi did little to hide his unhappiness.

Speaking post-game, Pochettino insisted there were no problems with Messi, saying his compatriot understood his decision.

“I took the decision to take Leo off to protect him for possible injuries. We have important games coming up and we want to protect him.

“These are decisions that we make for the good of the team. Everyone knows we have great players.

“But that’s why we’re standing in front of the bench thinking about what to do. And those decisions that you have to make, whether things go well or not. Whether you like it or not.

“Afterwards, Messi told me he was fine with the decision.”

Ikpeazu’s Office Spends ₦2.2 Billion On Welfare, ₦1.4bn On Vehicles In A Year

Over two-thirds of English Premier League players vaccinated against coronavirus