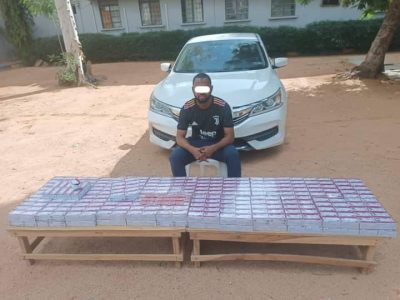 The Kano police command says it has arrested one Abba Musa, a resident of the state, with tramadol tablets worth N25 million.

Abdullahi Kiyawa, police spokesman in the state, announced the development in a statement on Monday.

According to Kiyawa, the suspect was arrested on Sunday around 10pm along Ahmadu Bello way.

“On investigation, the suspect confessed that the motor vehicle belonged to his friend, Sulaiman Danwawu, a 29-year-old, of Rijiyar Zaki Quarters Kano, and that Sulaiman directed him to hand over the motor vehicle to someone at Yan Kaba Quarters, Kano.

“Sulaiman was subsequently arrested. Sulaiman confessed that the motor vehicle belonged to him, and that he transported the Tramadol Tablets from Onitsha, Anambra State with the intent to sell them in Kano.”

Kiyawa added that Abubakar Zubairu, deputy commissioner of police in the state, has directed that the case be transferred to the command’s criminal investigation department (CID).

Zubairu also ordered officers to raid criminal hideouts as part of efforts to improve security in the state.